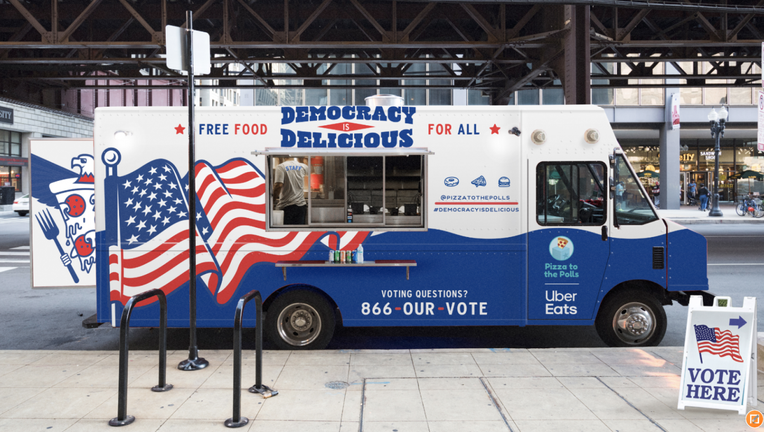 There’s nothing like exercising your civic right to work up an appetite.

In a patriotic pitch celebrating Election Day, Uber Eats plans to deploy a fleet of food trucks to offer free fare to voters at polling sites across the country.

With lengthy wait times likely to occur on voting lines, the food-delivery arm of the ridesharing platform is serving free food from 180 trucks at polling places in 25 cities, Uber announced. From "Vote Early Day" on Oct. 24 through Nov. 3, Uber and partner Pizza to the Polls will be on the road to deliver "free food and good vibes" to those waiting to cast their ballots. Free treats from Shake Shack, Milk Bar and other local favorites will also be served.

A photo shared in the press release showed a truck decorated with the slogan "Democracy is Delicious."

“We know waiting in line is difficult – so we’ll deliver snacks to make it better,” said Scott Duncombe, co-founder of the nonprofit, nonpartisan Pizza to the Polls, in a statement.

To further encourage turnout, as 14% of eligible voters cited transportation as an obstacle when voting in the 2016 election, per Harvard data, Uber is also making it easy for users to find local polling sites with a special in-app feature and reduced fare for trips to and from the polls, among other Election Day initiatives.