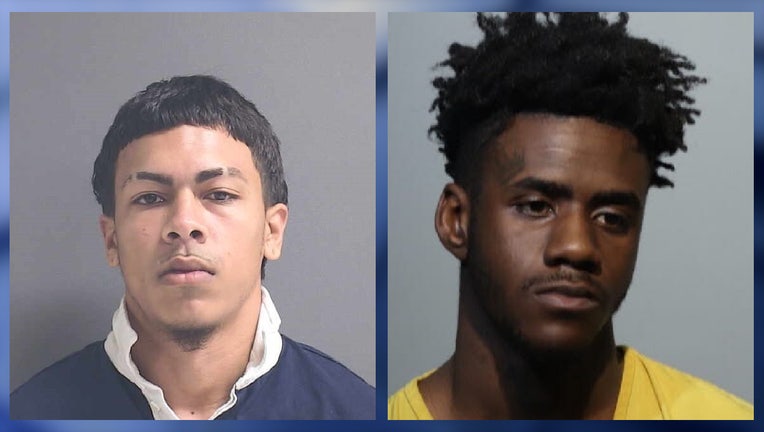 DELTONA, Fla. - One man is in custody while another remains on the run following a carjacking outside a smoke shop in Deltona where a man's car was stolen with his girlfriend in the passenger seat, according to the Volusia Sheriff's Office.

Authorities said they are looking for 19-year-old Kenneth Ocasio who is wanted on charges of carjacking and false imprisonment. His alleged accomplice, 19-year-old Tristian Daniels was taken into custody after the stolen 2022 Kia Forte was found Monday night in Seminole County, where Daniels was reportedly involved in two separate crashes in it.

Deputies responded to the High Spirits Smoke Shop on Fort Smith Boulevard around 8:30 p.m. on Thursday after a customer said his car was stolen from the parking lot. He told deputies his girlfriend was inside the car when a man in a ski mask jumped in the car and drove off.

Down the road, the girlfriend was able to jump out of the moving car when the suspect had slowed down enough. She had minor injuries on her foot and knee when falling on the pavement.

Deputies said no weapon was pulled out or implied during the incident.

Daniels was taken into custody on several charges: principal to carjacking, principal to false imprisonment, possession of a firearm by a delinquent, (which was filed after detectives determined he attempted to sell a handgun at the smoke shop), two counts of leaving the scene of a crash with property damage, two counts of reckless driving, driving without a valid license, possession of marijuana over 20 grams, and possession of drug equipment, authorities said.

Anyone with information about Ocasio's location is asked to call 911.