Fiona is the lowest-pressured land-falling storm on record in Canada. Credit: Fiona Kirkpatrick Parsons via Storyful

Fiona transitioned into a post-tropical cyclone Friday evening as it slammed into the Canadian Maritimes with hurricane-force winds, torrential rainfall and significant storm surge.

The threat of the powerful storm prompted Hurricane and Tropical Storm Warnings to be issued for hundreds of miles of coastline from New Brunswick and Nova Scotia to Newfoundland and eastern Quebec.

Fiona was the strongest hurricane of the 2022 Atlantic basin season and at one point was a Category 4 with sustained winds around 140 mph.

The National Hurricane Center said the storm system had sustained winds of around 105 mph and a pressure of 933 millibars, making it one of the strongest cyclones to ever impact the eastern parts of the country. 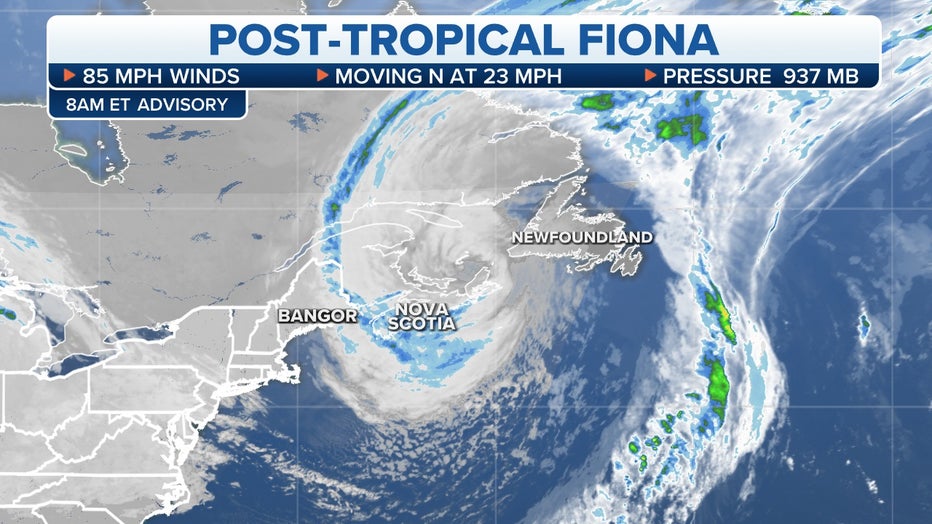 Where is Post-Tropical Cyclone Fiona?

As of Saturday morning, Hurricane Fiona was centered around 200 miles northeast of Halifax, Nova Scotia.

With winds at 85 mph, the cyclone is racing northward around 23 mph, a track that will take the system into the North Atlantic on Saturday.

Wind gusts as high as 93 mph were clocked in Bermuda on Friday morning as Fiona passed by to the west.

Where are watches and warnings in effect?

A Hurricane Warning means sustained winds of 74 mph or higher are expected within the warning area and is typically issued 36 hours before the anticipated first occurrence of tropical-storm-force winds (39-plus mph). These high winds are likely to be accompanied by storm surge, coastal flooding and/or river flooding.

A Tropical Storm Warning means sustained winds of 39 mph or higher are expected within the warning area within 36 hours. 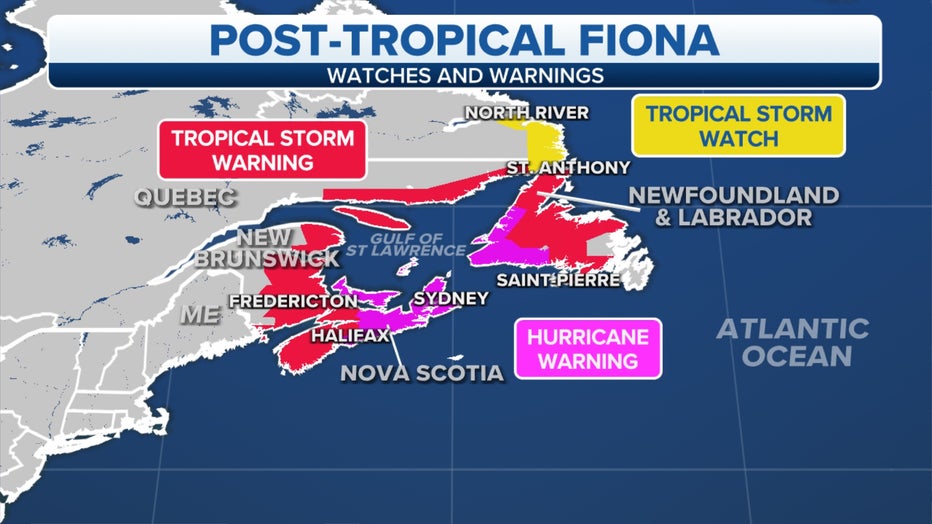 What are the expected impacts of Post-Tropical Cyclone Fiona in Atlantic Canada?

According to the FOX Forecast Center, Fiona is forecast to move toward the north or north-northeast and slam into Nova Scotia this weekend as a powerful post-tropical cyclone.

Tropical downpours could begin to arrive in Atlantic Canada on Friday before the peak rain and wind impacts spread across the region from Friday night into Saturday. Some rain and gusty winds could linger into Sunday as well.

"It doubles in size to about 1,200 miles," Frazer said. "By 2 a.m., we could see some winds gusting up near 100 mph across Newfoundland, as well as Halifax, and this is going to be hanging out for at least about 10 to about 12 hours." 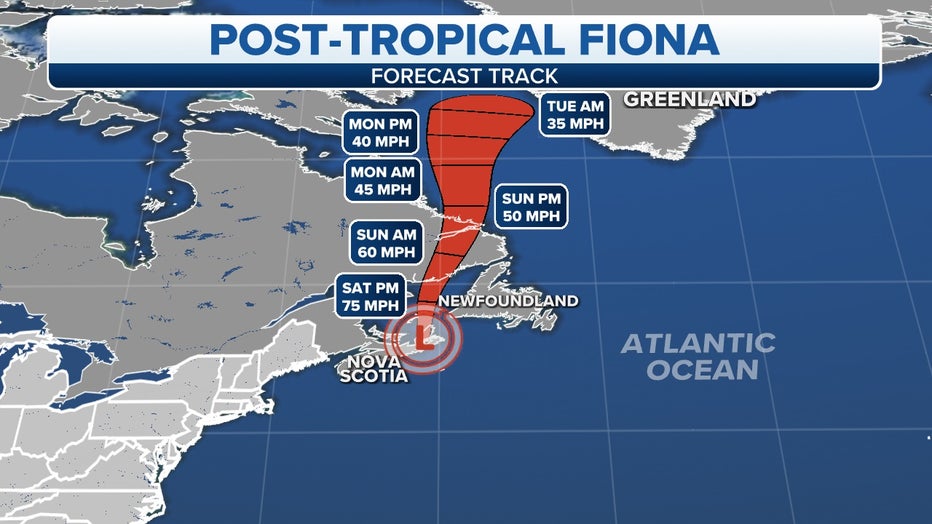 The projected path and intensity of Hurricane Fiona. (FOX Weather)

The FOX Forecast Center warns that areas from New Brunswick and Nova Scotia to Newfoundland and eastern Quebec will have threats of damaging winds, flooding rainfall and storm surge as Fiona crashes ashore in Nova Scotia.

"This storm will be a severe event for Atlantic Canada and eastern Quebec," the Canadian Hurricane Centre wrote ​in a statement Friday morning. "Numerous weather models continue to indicate that Fiona will transition into a very powerful post-tropical storm as it makes landfall in eastern Nova Scotia early Saturday morning. This storm will produce very heavy rainfall and severe winds." 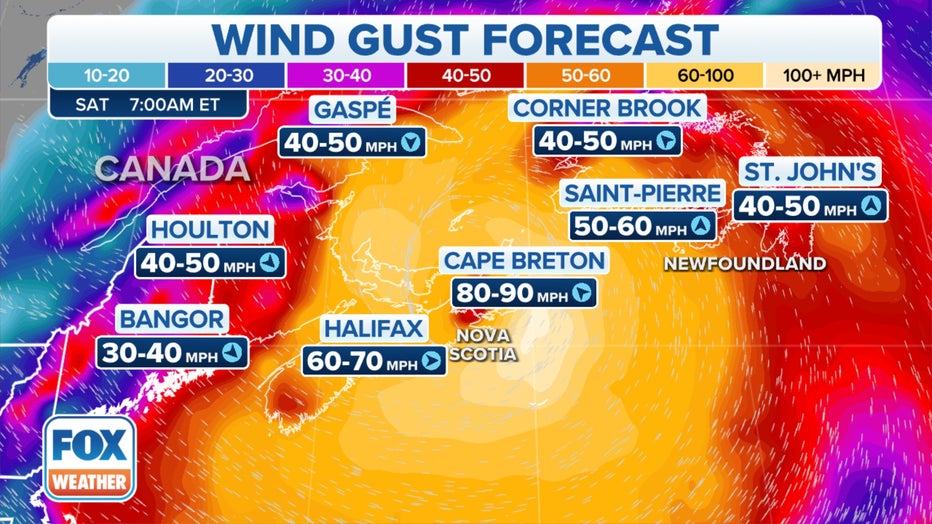 Widespread, potentially prolonged power outages, numerous downed trees, structural damage, washed-out roads and significant coastal erosion due to battering waves and storm surge are all potential impacts of Fiona in Atlantic Canada, regardless of whether it has transitioned to a post-tropical cyclone or if it's still a hurricane.

According to the FOX Forecast Center, there could even be high winds capable of scattered power outages and downed trees as far west as eastern Maine and New Brunswick and as far north as Labrador and eastern Quebec.

Between 3 and 6 inches of rain, with localized amounts up to 10 inches, is predicted across Nova Scotia, Prince Edward Island and western Newfoundland. This rainfall could result in areas of flooding, some of which might be significant.

Two to 5 inches of rain is forecast for eastern Quebec and Newfoundland, while 1 to 3 inches is expected in eastern New Brunswick. 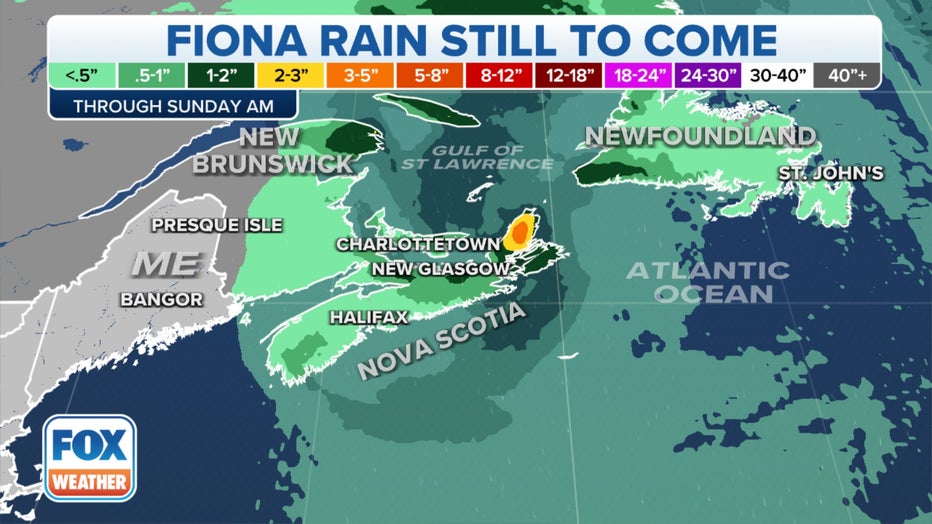 The U.S. East Coast will be spared these significant wind and rain impacts, but there will be a continued risk of high surf and life-threatening rip currents along the Atlantic coastline through Saturday.

Fiona could be one of Canada's strongest storms on record

Computer forecast models indicate that Fiona has the potential to challenge September low-pressure records in portions of Nova Scotia on Saturday, according to David Roth, a senior branch forecaster at NOAA's Weather Prediction Center.

It's not out of the question that Fiona's central pressure could even approach Canada's all-time lowest pressure, which currently stands at 940.2 millibars set on Jan. 20, 1977, in St. Anthony, Newfoundland.

In fact, according to Roth, most of the country's low-pressure records were set during intense winter storms rather than tropical or post-tropical cyclones.

But Atlantic Canada is also no stranger to hurricanes or their remnants.

Since 1951, the Canadian Hurricane Centre said the country has seen around two-dozen hurricanes or post-tropical cyclones that have made landfall along its Atlantic coast.

The names of recent tropical cyclones to impact the expansive coastline include Larry in 2021 and both Teddy and Isaias in 2020.

Hurricane Juan of 2003 is considered to be the most destructive in recent history. The Category 2 hurricane made landfall with winds of around 100 mph on Sept. 29. 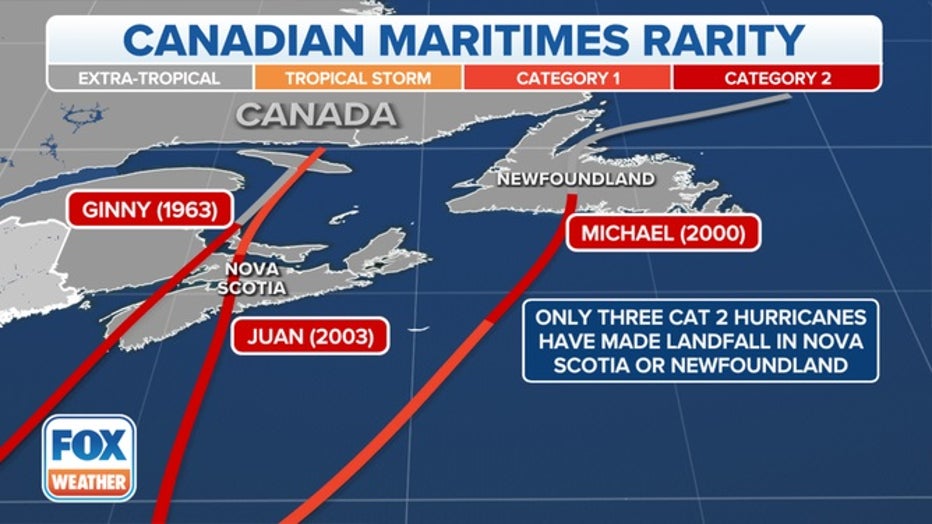 Some of the hardest-hit regions were Nova Scotia and Prince Edward Island.

What are the impacts to the US East Coast?

Even though Fiona stayed hundreds of miles off the U.S. East Coast, its indirect impacts will be felt along the Atlantic beaches from Florida to Maine.

Swells from the hurricane will continue to spread westward toward the Eastern Seaboard through Saturday.

The rough waters will increase the risk of life-threatening rip currents along beaches, and lifeguards caution less-skilled swimmers to never venture into the rough waters. 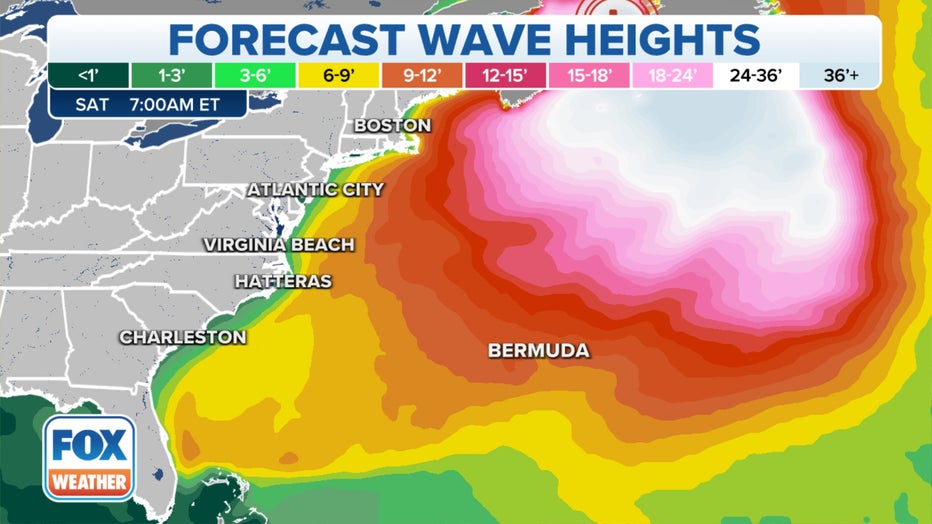 Hurricane Fiona's impacts in the Caribbean

Fiona made two landfalls as a Category 1 hurricane, the first one Sunday afternoon along the extreme southwestern coast of Puerto Rico and the second one early Monday morning in the eastern Dominican Republic.

In Puerto Rico, the city of Ponce clocked a 103-mph wind gust, while in the Dominican Republic, a gust of 98 mph was recorded in Samana at El Catey International Airport. The high winds plunged all of Puerto Rico into a blackout on Sunday as catastrophic flooding unfolded across the U.S. territory.

Hurricane Fiona made its first landfall in southwestern Puerto Rico on Sunday, Sept. 18, followed by a second landfall in the eastern Dominican Republic on Monday, Sept. 19. (FOX Weather)

Hurricane Fiona battered the Turks and Caicos on Tuesday as high winds and heavy rain spread across the islands after the hurricane had already turned deadly in Puerto Rico and the Dominican Republic.