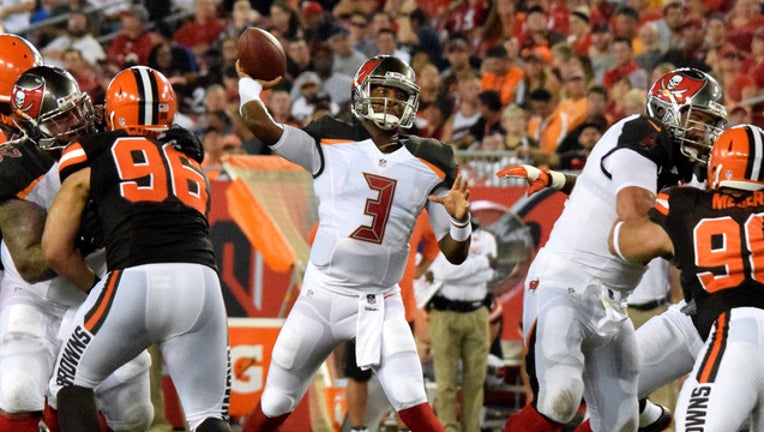 TAMPA, Fla. (AP) - Jameis Winston lights up when he talks about his competitive nature.

There's no throw the emerging young quarterback feels he can't make, no drive he can't extend with his feet, and certainly no team the Tampa Bay Buccaneers aren't capable of beating when he's on his game.

Winston wants his teammates to believe, too.

"As a team, we have to make that choice together. I'm not saying just because I want to win ... someone else wants to win. I'm saying all of us have to be together and be on the same page because if we have the same common goal, the same focus, we're going to win a lot of football games."

The Bucs improved from two wins in 2014 to six a year ago, when Winston took every snap as a rookie and threw for 4,042 yards and 22 touchdowns. That wasn't enough to save coach Lovie Smith's job, but it was encouraging enough that ownership promoted Dirk Koetter from offensive coordinator to Smith's replacement in hopes it will help Winston continue to grow.

"Before you start winning games, you've got to stop losing them," said Koetter, whose first order of business was to hire one of his old bosses — ex-Atlanta Falcons coach Mike Smith — as defensive coordinator.

Still, if the team is going to escape the NFC South basement and contend for its first playoff berth since 2007, Winston likely will have to set the tone — both on and off the field.

Koetter believes the 22-year-old quarterback is up to the challenge.

"Jameis every day asserts himself more and more as a leader," the coach said. "He still has plenty of things he needs to work on as the quarterback, but I love what he is doing leadership wise. ... He is the motivator for our whole team. Heck, he motivates me."

Some other things to know as the Bucs launch their bid to end a string of five consecutive last-place finishes:

AIR WINSTON: Winston joined Cam Newton and Andrew Luck as the only players in NFL history to throw for 4,000 yards as a rookie, helping the Bucs finish in the top five in total offense for the first time. He also proved to be an effective runner, scrambling for six touchdowns, which tied 1,400-yard rusher Doug Martin for the team lead. Teammates rave about the young QB's preparation and knowledge of Koetter's system.

"I said many times, I think there's a little bit of a misnomer out there that there's not a lot on Jameis' plate, or that it wasn't last year," Koetter said. "If you're playing quarterback in the NFL, there's a lot on your plate."

FIXING THE D: General manager Jason Licht spent his first two drafts upgrading a sputtering offense. He turned his attention to the defense this offseason, landing Ayers, Grimes and LB Daryl Smith in free agency before adding Hargreaves and Spence early in the draft. Improving an inconsistent pass rush has been a priority since the team last made the playoffs.

SOMETHING TO PROVE: Despite topping 1,000 yards receiving each of his first two seasons, WR Mike Evans enters his third year feeling as if he has a lot to prove after leading the team in dropped passes and scoring only three touchdowns a year ago, down from 12 as a rookie in 2014.

HANDING OFF: RB Doug Martin took some of the burden off Winston to carry the Bucs with 1,402 yards rushing, second in the NFL behind Adrian Peterson. He was rewarded with a five-year, $37.75 million contract. Backup Charles Sims was effective a year ago, too, finishing with 529 yards rushing and 561 yards receiving.

PLAYOFF TIME: Four-time Pro Bowl DT Gerald McCoy is entering his seventh season and has yet to experience the postseason. He has a good feeling about this team.

"Great coach, great staff, we put in a lot of work this offseason," McCoy said. "The maturity level of the team is much different than it's been in the past. Even with us having a lot of young guys, we have a lot of maturity in those young guys and not really many egos. That goes a long way on a winning football team."