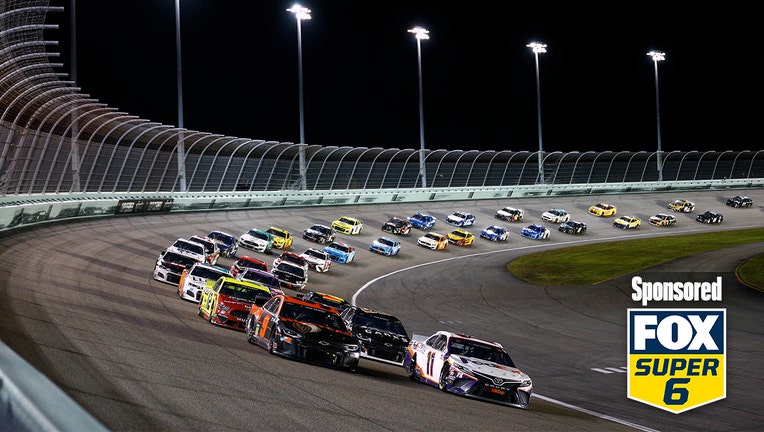 After two weeks on the northern end of Florida’s Atlantic Coast, the NASCAR circuit moves down I-95 to the Homestead-Miami Speedway for the Dixie Vodka 400.

And it is yet another chance for you to win a large amount of Clint Bowyer’s cash during FOX Super 6’s Stage 2 contest for this Sunday’s race (3:30 p.m. ET, FOX).

Pick the right answers to six questions about Stage 2 of the race and you can win the jackpot of $10,000 of Clint Bowyer’s money.

It’s free to play and it’s so much fun. Just download the FOX Super 6 app on your phone or mobile device and answer the six questions. That’s all you need to do.

Here are the six questions that are in play for this week’s race:

Which manufacturer will win Stage 2?

The first two weeks have seen Denny Hamlin and his Toyota win Stage 2 at Daytona, both in the regular Daytona 500 mile race and last week’s road race. Toyota also has Kyle Busch -- who has run historically well at Homestead.

How many cars will finish Stage 2?

It would seem unrealistic to think that all 38 teams would be able to get through Stage 2. But only one racer didn't finish last year’s Dixie Vodka race out of the 38-team field, and there were zero crashes.

Which of these drivers will have the fastest lap by the end of Stage 2?

Hamlin has done very well to start the season and both he and Busch have run extremely well lifetime at Homestead. Harvick is a sleeper in the sense that he also has great success in Miami, so going for him is a good outsider pick.

Which Driver will gain the most positions in Stage 2 (Hard Charger)?

Truex is starting ninth in the grid, so it is a decent pick to say that he could make the biggest leap forward towards the top in this one. Elliott is just behind him in the 11th spot. Both could be good bets because of their starting position and their cars being able to make up some ground.

Which racing team will have more drivers finish in the top 10 of stage 2?

Gibbs Racing has three cars in the Top 10 of the grid- Hamlin, last week’s winner in Christopher Bell and Truex. Joey Logano will lead Team Penske’s group while Kevin Harvick (Stewart-Haas) and Kurt Busch (Chip Ganassi Racing) all give a serious push at the front.

Which driver will have the best finish position in Stage 2?

Of these choices, Hamlin and Harvick stand out. Hamlin posted two solid results to start the season even if they didn’t end up in victory lane, plus he’s got three wins in Miami and has led 393 laps there. Harvick has one Miami win but has led 414 laps on the Homestead track. Add it all together and you could do a lot worse than those two picks.

Play Clint Bowyer's NASCAR Stage 2 Super 6 content for free and you could win $10,000! Just download the Super 6 app and make your picks now for your chance to win!