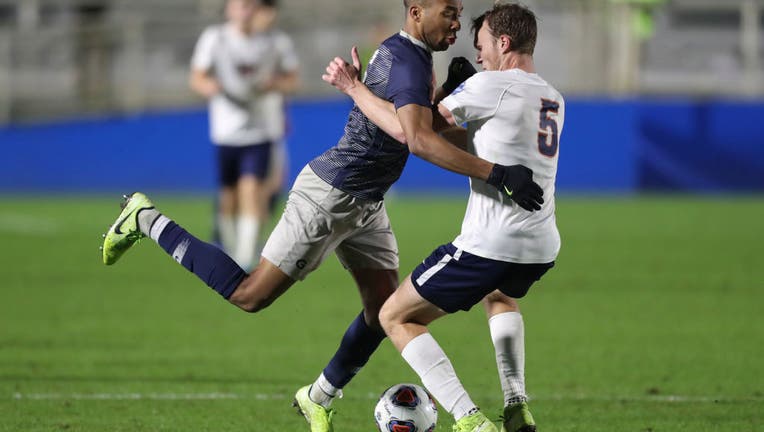 CARY, NC - DECEMBER 15: Derek Dodson #9 of the Georgetown Hoyas and Henry Kessler #5 of the Virginia Cavaliers compete for the ball during the Division I Men's Soccer Championship held at WakeMed Soccer Park on December 15, 2019 in Cary, North Caroli

Shortly after, the Lions followed suit by selecting Dodson’s college teammate, defender Rio Hope-Gund, at No. 19 overall and added another to the backline with defender Brandon Hackenberg (No. 22 overall) out of Penn State University. To close out the day, City selected goalkeeper Andrew Pannenberg with its lone pick in the second round at No. 49 overall.

"It’s all positional and filling needs. We had [Derek] Dodson in mind and No. 8 is where we thought he was going to go. We liked Dodson a lot since we saw him play last year in the final, and we thought this a great move to get a guy that we really wanted," EVP of Soccer Ops Luiz Muzzi said on the Club’s approach to the Draft. "We think there’s a lot of talent. We think that college is a part of our system and we value our system. There’s a lot of good players in college, a lot of great programs out there that do a great job. We’re really happy."

Dodson, 23, was one of three captains for the 2019 College Cup Champion Georgetown side, scoring 11 goals with eight assists to help the program to its first national title. In that same year, Dodson earned United Soccer Coaches All-America honors and was a First Team All-East Region Selection while also being named to the Big East All-Tournament Team.

A three-time All-Big East honoree, Dodson totaled 65 appearances in three years with the Hoyas with 47 starts, netting 30 goals, including 10 game-winners, and adding 11 assists.

At No. 19 overall, the Lions opted to go with Dodson’s college teammate in Hope-Gund. Throughout the Hoyas' run to the 2019 College Cup title, Hope-Gund started 20 matches, part of a defense that posted 13 shutouts on the year. In three years at Georgetown, Hope-Gund appeared in 36 matches, scoring two goals and adding two assists while contributing to 21 shutouts in that span.

Hackenberg, 21, has spent four seasons with the Nittany Lions, totaling 45 career appearances with 36 starts, contributing to 12 shutouts while netting one finish. As a redshirt junior in 2019, Hackenberg earned first-team All-Big Ten honors and was named to the United Soccer Coaches All-North Region Third Team, starting all but one match for Penn State through the campaign to lead the Nittany Lions to six shutouts on the year.

To round out the afternoon, City selected Pannenberg out of Wake Forest University. As a redshirt junior in 2020, Pannenberg started all nine matches in net for the Demon Deacons, recording four shutouts and finishing the year with 26 saves, 0.84 goals against average and a 0.77 save percentage.