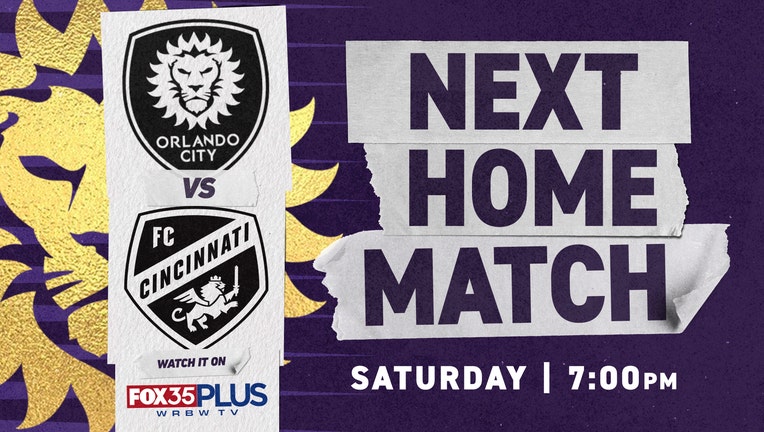 The match, presented by Exploria Resorts, will be locally televised on FOX35 PLUS and transmitted on Real Radio 104.1 in English and Acción 97.9FM, 810AM in Spanish. Information on tickets is available here or by calling (855) ORL-CITY.

"The game is against a rival that I think is looking for their form. It’s a new coach, it’s a team that hasn’t had good results, but in the last game they played well. We have a lot of respect for Cincinnati and the best way to do it is to perform the best we can," Head Coach Oscar Pareja said ahead of the match. "The preparation during the week has been first class from the players. They came from Chicago very optimistic, at the same time with the adversity that we had there, but we have overcome it and we are preparing for this next game. The players are good, we’re good and we’re working."

City will look to remain unbeaten against the Orange and Blue on Saturday night, holding a 3-0-2 record against the weekend’s opposition through five previous matchups. In The City Beautiful, the side has taken a pair of commanding victories, including a 5-1 win on May 19, 2019 followed by a 3-0 shutout victory on May 1 of the 2021 campaign.

The Lions will look to build off a scoreless draw at Chicago Fire FC this past weekend. Júnior Urso looked to have given the side the lead in the 73rd minute of play, but his finish was called back following a handball decision on video review. With the clean sheet, Pedro Gallese matched former City goalkeeper Joe Bendik’s franchise record with his 13th as a Lion, doing so in 49 starts, compared to the 91 starts of Bendik’s Orlando City career.

Having yet to concede a goal in 2022, Gallese sits as one of five goalkeepers in MLS to open the year with a pair of clean sheets.

Cincinnati comes into Saturday’s match looking for its first result of the year after falling to D.C. United this past weekend, suffering a 1-0 defeat. A penalty kick late into second-half stoppage time from Ola Kamara gave the visitors all three points on the night despite being reduced to 10 men in the 80th minute.

Following Saturday’s match, the Lions will head out on a pair of trips to the west coast, first traveling to take on LA Galaxy on Saturday, March 19 in a nationally televised match on Univision and TUDN. Kickoff for that match is set for 3:30 p.m. ET at Dignity Health Sports Park.