Omicron variant: What to know about the new COVID-19 strain

An advisory panel of the World Health Organization classified on Nov. 27, 2021, a worrying new COVID-19 variant first detected in South Africa as a highly transmissible virus of concern, naming it "Omicron" under its Greek letter system.

Games between NHL teams in the United States and Canada have been postponed in reaction to the recent uptick in COVID-19 cases across the sports world.

The NHL announced an agreement with the players’ union on Sunday that would halt all cross-border games between Dec. 20 and Dec. 23. Those games will be made up at a later date.

Prior to Saturday, 27 NHL games had been postponed due to COVID-19-related events. The upcoming postponements add another 12 to that number. They include the following:

With the Beijing Olympics starting in February, many NHL players are expected to represent their countries at the Winter Games. But the NHL and NHLPA are still discussing whether players will make the trip to China.

The Winter Olympics begin Feb. 3. Participants who are fully vaccinated against the coronavirus will enter a "closed-loop management system upon arrival" in China. Unvaccinated participants will need to quarantine for 21 days upon their arrival.

A decision is expected in the coming days.

Other sports leagues have faced similar disruptions to their regular seasons. The NFL announced a wave of postponements for its Week 15 slate of games after more than 100 players tested positive.

The NBA postponed several games this month due to high numbers of players testing positive for the virus. And dozens of college basketball programs are facing shutdowns related to COVID-19 cases.

For the most part, professional players in all leagues are fully vaccinated, which had led officials to shy away from league-wide shutdowns. 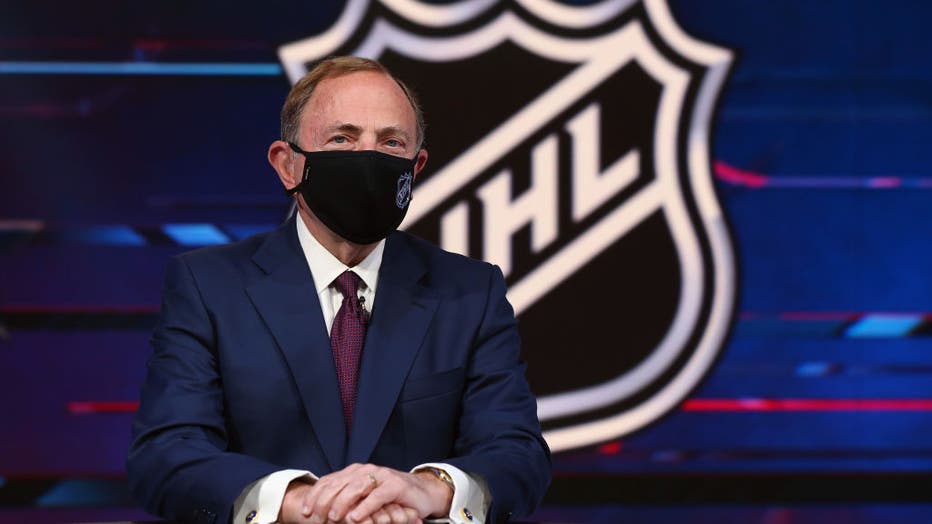 NHL commissioner Gary Bettman prepares for the first round of the 2020 National Hockey League Draft at the NHL Network Studio on Oct. 06, 2020, in Secaucus, New Jersey. (Photo by Mike Stobe/Getty Images)

"Although there has been a recent increase in positive COVID test results among Players, coaches and hockey staff, there have been a low number of positive cases that have resulted in concerning symptoms or serious illness," the NFL said. "Therefore, the NHLPA's and NHL's medical experts have determined that, with virtually all Players and Club hockey staff fully vaccinated, the need to temporarily shut down individual teams should continue to be made on a case-by-case basis."

"I know I’m getting political, but at the end of the day, our players are testing positive with very little symptoms, if any symptoms at all," Yzerman said, according to FOX News. "I don’t see it as a threat to their health at this point. So I think we need to take it a step further and question why are we even testing guys that have no symptoms?"