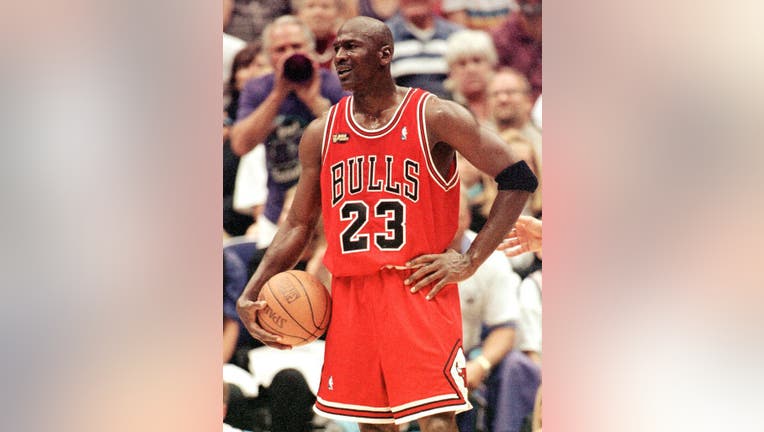 Michael Jordan of the Chicago Bulls looks on during a break in play 03 June in game one of the NBA Finals against the Utah Jazz at the Delta Center in Salt Lake City, UT. The Jazz defeated the Bulls 88-85 in overtime to take a 1-0 lead in the best-of

CHICAGO - A jersey worn by Michael Jordan during the 1998 NBA finals in Utah will be auctioned off by Sotheby's next month.

In Game 1, Jordan played for 45 minutes and scored 33 points.

"The Last Dance as it’s called, was Michael’s final season with the Chicago Bulls (1997-1998) and is perhaps the most beloved period in Jordan folklore, as Michael reached the apex of his popularity and powers while simultaneously conquering major internal divisions that were fracturing the team dynamics of the late 90s Chicago Bulls," the auction house said.

The Bulls eventually went on to win the championship in six games, and Jordan was named MVP.

According to auction house, the jersey is one of just two jerseys he wore in a finals game to appear at auction.

It could sell for up to $5 million.

The jersey will be on exhibition in Monterey, California from Aug. 17 to Aug. 20. The jersey will then return to Sotheby's New York for exhibition from Sept. 6 to Sept. 12 — with bidding opening on Sept. 6 at Sothebys.com.

In order to bid on the jersey, clients will need to register with Sotheby's in advance.