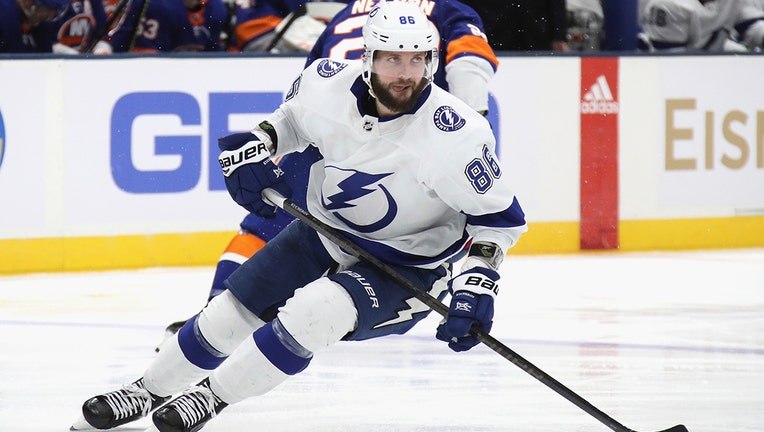 STOCKHOLM (AP) - Nikita Kucherov got the Tampa Bay Lightning off to a fast start in Sweden.

Kucherov scored and Andrei Vasilevskiy made 20 saves to help Tampa Bay beat the Buffalo Sabres 3-2 on Friday night in the first of their two regular-season games in the Swedish capital.

The sold-out games at Ericsson Globe are part of the NHL Global Series.

Alex Killorn and Yanni Gourde also scored for the Lightning.

Kucherov opened the scoring at 3:19 of the first period. Brayden Point and Kevin Shattenkirk set up the play for Kucherov to sweep in on a one-timer. The reigning NHL MVP has five goals and seven assists this season. He had He had 41 goals and 128 points last season.

"That's a world-class finish," Tampa Bay coach Jon Cooper said. "Great play. Great for Shatty to recognize that and wrap that around. I'll have to see, but I don't know if that puck hit the ice. Not a lot of guys can do that, but he's one of them. I thought he had a great game after that."

Kucherov made his presence felt again later in the period when Buffalo forward Vladimir Sobotka needed assistance from his teammates to get off the ice after a hit from the Lightning star.

"Their decision was it was a fair hit," Buffalo coach Ralph Krueger said. "We need to move on whether we like it or not."

"I think the both teams understand the competitiveness of our division and this first challenge between us is worth more than just two points and that's why you had that intensity tonight.

The Lightning, last season's Presidents' Trophy winners, improved to 7-5-2 amid a slow start to the season.

"We made smart decisions with the puck," Cooper said. "And when you do that you limit odd-man rushes, which I thought we did tonight."

Killorn scored on a power play with 3:46 remaining in the period, tipping home favorite Victor Hedman's slap shot from the blue line past goalie Linus Ullmark. Hedman, the only Swede on the Tampa Bay team, recovered from a lower-body injury in time to play.

"That was probably one of the most special things I've experienced as a hockey player, hearing the (Swedish) national anthem before an NHL game. I was really focusing in on that flag and trying to keep emotions in check."

Reinhart cut it to 2-1 with 4:17 left in the second, redirecting Rasmus Ristolainen's wrist shot.

"Our offence definitely needs to shoot more," Krueger said. We need to create more pressure on the net. We'll definitely be speaking about that."

The Sabres had a flying start to the season with a 8-1-1 record but are 1-4-1 since. They scored just three goals in the past three games.

It's the third straight year -- and eighth overall -- the NHL has played in Europe to try to increase its local following in hockey-mad countries including Sweden, Finland and the Czech Republic. The Philadelphia Flyers beat the Chicago Blackhawks 4-3 in their season opener in Prague on Oct 4.

NOTES: It was the 27th NHL regular-season game in Europe, 12th in Sweden and 11th at Ericsson Globe. NHL Commissioner Gary Bettman said Friday the Boston Bruins and the Nashville Predators will open the regular season next year with a game in Prague, and the Colorado Avalanche and the Columbus Blue Jackets will play a couple of games in the Finnish capital of Helsinki. ... Vasilevskiy is 9-1-1 against the Sabres. . .. Buffalo D Rasmus Ristolainen assisted on Reinhart's first, to reach career 200 points.

UP NEXT: The Sabres and Lightning complete the two-game series in Stockholm on Saturday night.