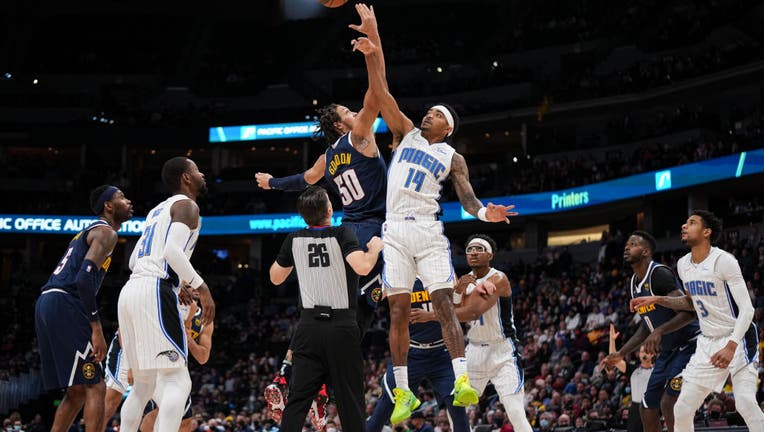 DENVER, CO - FEBRUARY 14: Aaron Gordon #50 of the Denver Nuggets and Gary Harris #14 of the Orlando Magic face off for a jump ball at Ball Arena on February 14, 2022 in Denver, Colorado. NOTE TO USER: User expressly acknowledges and agrees that, by d

Jeff Green and Will Barton added 17 points apiece and Bryn Forbes had 16 for the Nuggets, who have won four of five since losing three in a row. Bones Hyland had 14 points and Aaron Gordon 10.

Franz Wagner scored 26 points to lead the Magic, who have lost three in a row, all by double digits. Wendell Carter Jr. added 25 points and Jalen Suggs had 16.

Leading by 13 points at the half, the Nuggets got a jumper from Forbes at the end of the third quarter, followed by a driving dunk by DeMarcus Cousins to start the fourth and extended their lead to 87-70.

Orlando fought back to within 99-87 on Carter’s dunk with 6:54 left to play and cut the deficit to eight points on Carter’s 3-pointer with 1:32 remaining. Jokic answered with a 3-pointer from the corner on the Nuggets’ ensuing possession, and Green had a dunk and Hyland a pair of free throws around a 3-pointer by Wagner to help fend off the Magic’s comeback bid.

The Magic got off to a slow start, missing their first seven attempts from 3-point range and trailing 29-14 after the first quarter. They fell behind by as many as 22 points in the second quarter before managing to gain some ground and closing to within 53-40 at halftime.

Magic: F Moritz Wagner was held out the game with bruised left ribs. ... Former Nuggets player Gary Harris had 15 points in his first game back in Denver since being traded to Orlando a year ago.