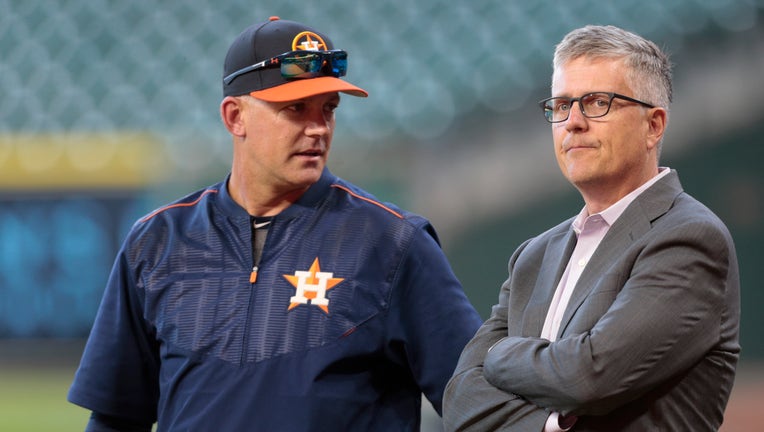 HOUSTON - The Houston Astros General Manager Jeff Luhnow and manager A.J. Hinch have been fired by the team following Major League Baseball’s investigation into the camp's cheating during the 2017 championship season

Luhnow and Hinch were suspended for a year by the MLB.

In addition, the Astros are facing a $5 million fine, which is the highest allowable fine under the Major League Constitution.

MLB's investigation into the sign-stealing scandal involving the Astros determined that the club broke the rules in 2017 and part of 2018.

Luhnow and Hinch will be suspended without pay until the day following the completion of the 2020 World Series.

According to the report, at the beginning of the 2017 season, employees in the Astros’ video replay review room began using the live game feed from the center field camera to attempt to decode and transmit opposing teams’ sign sequences.

During the 2017 season, a group of players, including Carlos Beltrán, discussed that the team could improve on decoding opposing teams’ signs and communicating the signs to the batter. Cora arranged for a video room technician to install a monitor displaying the center field camera feed immediately outside of the Astros’ dugout.

Witnesses reported that one or more players watched the live feed of the center field camera on the monitor, and after decoding the sign, a player would bang a nearby trash can with a bat to communicate the upcoming pitch type to the batter. One or two bangs corresponded to certain off-speed pitches, while no bang corresponded to a fastball.

Many of the players who were interviewed admitted that they knew the scheme was wrong because it crossed the line from what the player believed was fair competition and/or violated MLB rules.

Luhnow denies any knowledge about the sign-stealing.

However, that is not the case for Hinch. While Hinch was not part of the scheme, he knew about it. Despite saying he disapproved, he did not stop his players or Cora from sign stealing.

The investigation revealed no evidence that Astros owner Jim Crane was aware of any of the conduct described in the report.

Crane is extraordinarily troubled and upset by the conduct of members of his organization. 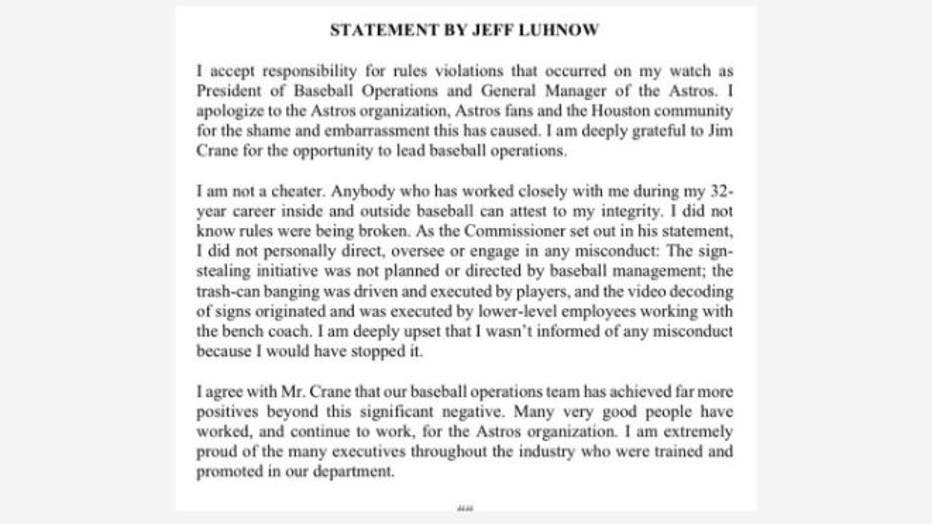 Hinch has also released the following statement in wake of MLB's decision:

“I appreciate Commissioner Manfred‘s unwavering commitment to upholding the best interests of baseball. I regret being connected to these events, am disappointed in our club‘s actions within this timeline, and I accept the Commissioner’s decision. As a leader and Major League Manager, it is my responsibility to lead players and staff with integrity that represents the game in the best possible way. While the evidence consistently showed I didn’t endorse or participate in the sign-stealing practices, I failed to stop them and I am deeply sorry. I apologize to Mr. Crane for all negative reflections this may have had on him and the Astros organization. To the fans, thank you for your continued support through this challenging time - and for this team. I apologize to all of you for our mistakes but I’m confident we will learn from it  - and I personally commit to work tirelessly to ensure I do. My time in Houston has provided some of the greatest moments in my career and those memories will always be near and dear to me and my family. I regret that my time with the Astros has ended, but will always be a supporter of the club, players, and staff I’ve had the privilege of working alongside. I wish them the best in the future of the game I love.”

"Being loyal fans of Houston sports teams means that we stand with them in good times and during times of challenge. Today is a difficult day. As a city, we extend our hearts to an Astros' organization that is hurting.

The Houston Astros carried us on their shoulders during the 2017 World Series championship season. We will never forget how they played with passion and made us proud.

Now, it is our turn to carry the Astros on our shoulders and lift the owner, coaches, and players as they focus on moving the organization beyond this challenge.

I commend Houston Astros' owner Jim Crane for going over and above what was required by Major League Baseball.

As a city, we look forward to the start of spring training and the next season.The Astros are world class champions on and off the field at all times."