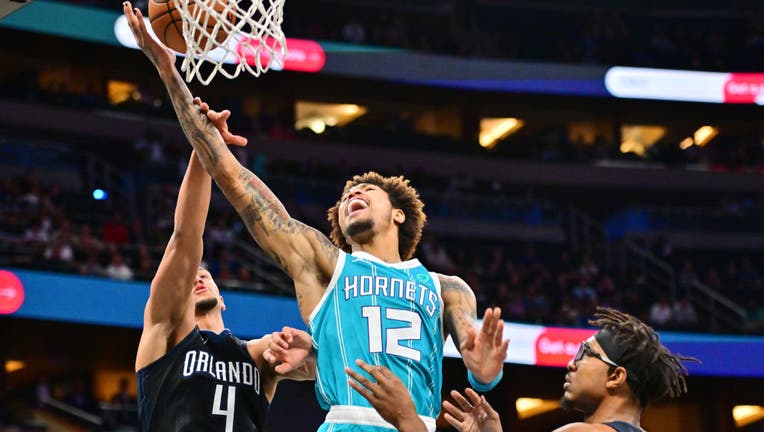 ORLANDO, FLORIDA - NOVEMBER 14: Kelly Oubre Jr. #12 of the Charlotte Hornets draws the foul from Jalen Suggs #4 of the Orlando Magic in the first half at Amway Center on November 14, 2022 in Orlando, Florida. NOTE TO USER: User expressly acknowledges

ORLANDO, Fla. (AP) - LaMelo Ball had 17 points and nine assists, and the Charlotte Hornets stopped an eight-game slide with a 112-105 victory over the Orlando Magic on Monday night.

Franz Wagner scored 23 points and Wendell Carter Jr., added 20 for Orlando, but the Magic had 22 turnovers.

Ball, who missed the Hornets’ 113-93 loss at Orlando last month because of a sprained ankle, played in only his second game of the season after missing the first 13.

Bol Bol and Chuma Okeke made two 3-pointers each to launch Orlando’s only serious run of the game, but the Magic could get no closer than seven.

With the help of 13 Magic turnovers, Charlotte dominated the first half, leading 58-45 at the break despite going 3 for 17 from beyond the arc.

Mo Bamba kept Orlando in the game in the first half with 14 points and seven rebounds.

Magic: Rookie F Paolo Banchero (sprained ankle) did not play for the third straight game. ... G Cole Anthony missed a ninth game due to a torn oblique. ... On their current homestand, which ends Wednesday night, the Magic have defeated Golden State, Dallas and Phoenix while losing to Oklahoma City, Houston and Charlotte.

Hornets: Play at home against Indiana on Wednesday night.

Magic: Play at home against Minnesota on Wednesday night.