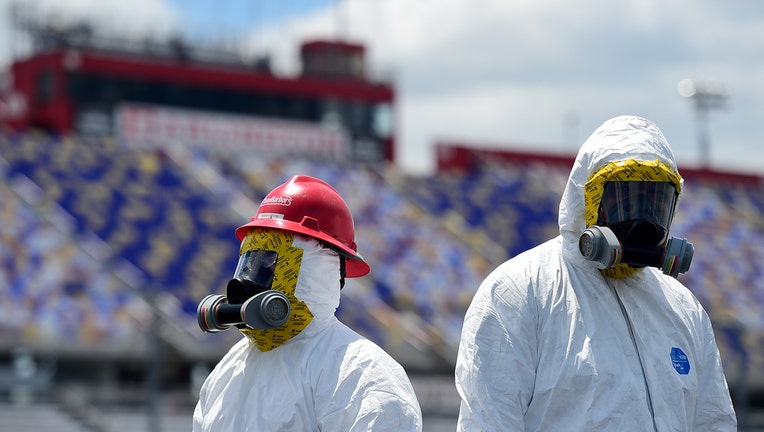 CHARLOTTE, N.C. - NASCAR will not be as you remember it when racing returns at old egg-shaped Darlington Raceway.

There will be no elaborate infield tailgates, inflatable pools or hundreds of American flags that fly above the campers. The grandstands will be empty gray rows, no spectators allowed.

Darius Rucker will perform a virtual version of the national anthem, Fox Sports will call the race remotely from a studio in Charlotte, N.C., and the victory lane celebration will be a muted affair void of high-fives and hugs. Drivers don't have to shuttle between hospitality events to schmooze with sponsors, and their car owners aren't even expected to be at Sunday's race. Most are over 65 and considered at risk for the coronavirus and not essential to conduct a race.

MORE NEWS: NASCAR plans to race its way through the South in June

It will be weird and look nothing like it did 10 weeks ago when NASCAR last raced before its season was suspended by the coronavirus pandemic. But as sports fans across the country have clamored for live action, it will be a rare opportunity for NASCAR to be alone in the spotlight and showcase its product — perhaps even to viewers who have long expressed zero interest in stock car racing.

There is no practice or qualifying, and Brad Keselowski will lead the field to green at 3:30 p.m. ET; the lineup was set in a televised random draw. Most of the drivers last raced March 8 and will take the green flag with no warm-up and no idea if their car is properly prepared to tackle NASCAR's oldest superspeedway.

Darlington is considered one of the most technical tracks on the circuit.

“I envision people are going to be pretty timid, at least for the first few laps,” said Denny Hamlin, who won the Daytona 500 on Feb. 17, the first of only four completed races this season.

Hamlin anticipated conservative setups based partly on data from the Southern 500 last September, NASCAR's last visit to “The Track Too Tough To Tame." Once the drivers have settled in, Hamlin believes “it’s going to be like an old shoe. I don’t think from a TV perspective fans will see anything different than just a normal race that they would normally see at Darlington.”

A refresher on where NASCAR left off following its last race, March 8 at Phoenix:

Kevin Harvick is the points leader with four top-10 finishes through four races. The Stewart-Haas Racing driver is winless but did finish second in NASCAR's last outing at Phoenix.

Since joining SHR in 2014, Harvick has a win at Darlington, six top-10s in six appearances and is coming off consecutive fourth-place finishes at the 1.366-mile oval. But he cautioned against automatic success since the last available notes from the track are from last September, when the race started in the day and ended under the lights.

“Darlington is a very sensitive temperature track, so I think you kind of have to evolve as the race evolves,” Harvick said. “I think the biggest goal in this instance is to just not be in right field, try to get yourself in the ballpark and be able to adjust on it so you don’t have to have a rebuild and a reboot."

Newman suffered a head injury when he crashed racing for the win on the final lap of the Daytona 500. The pandemic afforded him extra time to heal and Newman has missed only three Cup races.

He tested at Darlington shortly before the season was suspended and determined then he was fit to race again. The 10-week wait was just bonus time for the driver considered to be most difficult to pass.

“I just like it because you run right up next to the fence," Newman said. "It’s unique on both ends, very challenging. It’s just a lot of fun to actually hustle the car around there.”

MATT KENSETH IS BACK, TOO

Few expected Chip Ganassi to bring Kenseth out of retirement after firing Kyle Larson in April for using a racial slur in an iRacing event.

But the two-time Daytona 500 winner and former series champion agreed to complete the season for Ganassi after a more than a year out of a Cup car. Kenseth has never competed at this level in a Chevrolet or in NASCAR's current aerodynamic package, but he is a former Darlington winner and one of the most respected drivers in the sport.

At 48, he's also the oldest driver in the field and will be getting into the car cold on Sunday after a hiatus of more than 15 months.

“From my standpoint, I’m like, I don’t want him back,” said former teammate Hamlin. “I know he gives great information. I think he’s probably going to lift that program up. He’s my buddy, but I prefer him just to stay home at this point.”

NASCAR has rescheduled 20 races starting Sunday through June, all in Southern states, and the Cup Series will be busy with four events in 11 days.

Reigning series champion Kyle Busch and Timmy Hill, breakout star of the iRacing Series run during the shutdown, are taking it even further as they plan to compete in all seven events scheduled in May.

Busch and Hill are adding Xfinity Series races at Darlington and Charlotte, and a Truck Series race at Charlotte to their calendar.

Busch had just been settling into his groove with a pair of top-three finishes before the season stopped. His only victory so far this season was the Truck Series race at home track Las Vegas.

Joey Logano opened the season with new crew chief Paul Wolfe and won twice in the first four events to cycle to the top of Team Penske.

His momentum has been put on pause and Logano is winless at Darlington in 11 previous races.

Ryan Blaney inked an extension with Team Penske right before the shutdown, but almost all business had been put on hold until Alex Bowman announced Saturday he'd signed with Hendrick Motorsports through 2021.

Bowman won at California to join Logano and Hamlin as the only Cup winners this season.

Those extensions and the firing of Larson have likely cycled Keselowski to top of the free agent market. He's in the final year of his contract with Penske but the only former series champion available.

LaJoie at the start of the season delivered Rick Hendrick a hand-written letter pleading his case to replace seven-time champion Jimmie Johnson when Johnson retires at the end of this season.