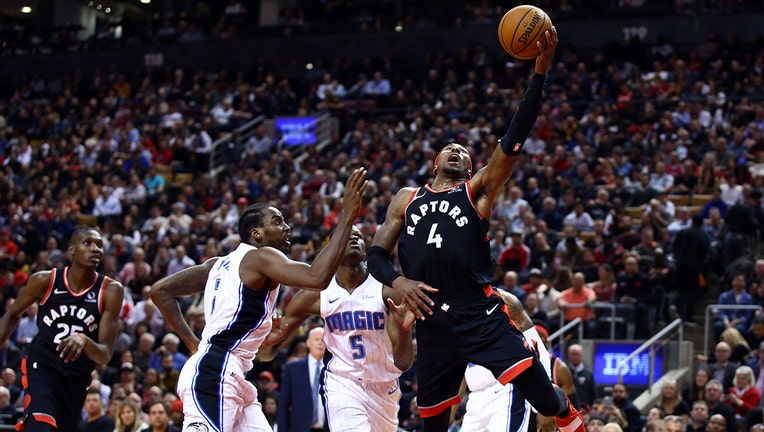 TORONTO, ON - NOVEMBER 20: Rondae Hollis-Jefferson #4 of the Toronto Raptors shoots the ball as Al-Farouq Aminu #2 of the Orlando Magic defends during the second half of an NBA game at Scotiabank Arena on November 20, 2019 in Toronto, Canada. NOTE TO

Orlando lost center Nikola Vucevic and forward Aaron Gordon to right ankle injuries in the second quarter.  Vucevic came in as the reigning Eastern Conference Player of the Week after averaging 21.7 points, 14.0 rebounds, 4.0 assists, and 1.33 blocks during Orlando's winning streak.

Raptors rookie Terence Davis scored a career-high 19 points, Chris Boucher had 14 points and 11 rebounds, and Norman Powell scored 15 points. Defending champion Toronto improved to 6-0 at home and won for the eighth time in 10 meetings with the Magic.

Forward Jonathan Isaac started for Orlando after missing the previous two games because of a sprained right ankle. Isaac splayed 33 minutes, scored 16 points and matched his career-high with 13 rebounds.   Evan Fournier scored 21 points, Terrence Ross had 14 and Markelle Fultz added 12 for the Magic. They are 0-5 on the road.

Toronto's OG Anunoby left Monday's win over Charlotte after he was hit in the right eye for the second time in eight days. Anunoby wore protective glasses to begin the game, but removed them midway through the first. He did not attempt a shot while wearing the glasses.

Gordon checked out with 8:27 left in the first half, seconds after ending up on the floor while trying to block Anunoby. Vucevic went down along his own baseline with 5:29 left in the half after injuring his right ankle while trying to defend Norman Powell's drive to the basket. Vucevic had to be helped to the locker room, unable to put weight on his right leg.

VanVleet scored nine points in the second as Toronto led 61-51 at halftime, then scored seven more in the third to give the Raptors a 79-68 advantage through three.

Magic: G Michael Carter-Williams said an MRI showed no structural damage to his injured left hip. Carter-Williams left in the second quarter of Sunday's home win over Washington. There is no timetable for his return. ... Orlando scored 32 points in the first quarter but just 36 in the second and third combined. ... Canadian Khem Birch scored a season-high 12 points.

UP NEXT
Magic: At Indians on Saturday.
Raptors: At Atlanta on Saturday night.