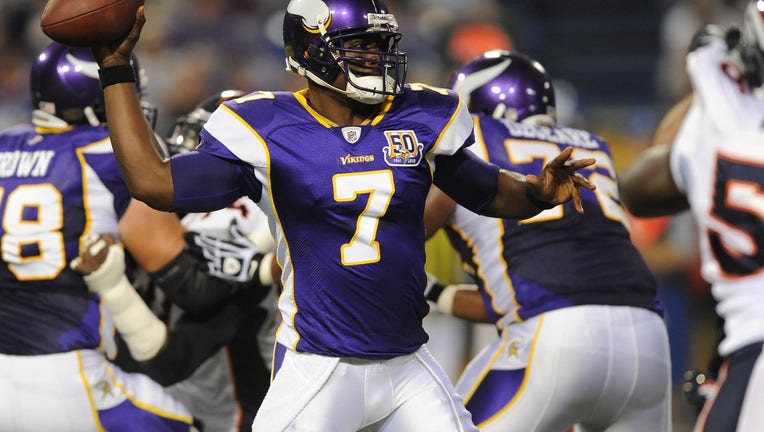 MINNEAPOLIS - SEPTEMBER 2: Tarvaris Jackson #7 of the Minnesota Vikings passes the ball during an NFL preseason game against the Denver Broncos at the Mall of America Field at Hubert H. Humphrey Metrodome, on September 2, 2010 in Minneapolis, Minneso (Tom Dahlin/Getty Images)

The 36-year-old was currently with Tennessee State University as the Tigers' quarterbacks coach.

“My heart is so heavy with hurt hearing of the passing of Coach Jackson,” said TSU Director of Athletics Teresa Phillips. “We were blessed with him for a short time but he did make an impact with our young men in this one season at TSU. Our thoughts and prayers go out to his young family and all who knew and loved him. We lift up all who are mourning today. Each loss is piercing. Today I ask God’s comfort to spread through the TSU community, the nation and the world.”

“Our thoughts and prayers go out to the Jackson family in this time of bereavement,” said TSU Head Coach Rod Reed. “We are devastated. He was an awesome young man and he will be missed by our players, our staff and the TSU family.”

Jackson spent the first five seasons of his NFL career with the Vikings, mostly as a backup quarterback. He later played for the Buffalo Bills and Seattle Seahawks. He made 12 starts in his second season with the Vikings in 2007, throwing for more than 1,900 yards, nine touchdowns and 12 interceptions while going 8-4.

Jackson made one playoff start with the Vikings, in the 2008 NFC Wild Card Playoffs against the Philadelphia Eagles. He finished that game 15-of-35 for 164 yards and one interception, a game the Vikings lost.

The Vikings released a statement on Jackson's death on Monday.

"The entire Vikings family is saddened by the news of Tarvaris Jackson being taken from us too soon. One of Tarvaris' greatest attributes was his positive outlook and approach. He genuinely cared about others, was a good friend and will be missed by family, teammates and Vikings fans everywhere. We send our deepest condolences to his family."

Jackson later went onto win a Super Bowl as the No. 2 quarterback with the Seattle Seahawks in 2014.

According to the Alabama Law Enforcement Agency, authorities responded to a single-vehicle crash at about 8:50 p.m. Sunday.

Jackson was driving a 2012 Chevy Camaro when it left the roadway, struck a tree and then overturned. He was taken to a local hospital, where he was later pronounced dead. The crash happened about seven miles south of Montgomery, where Jackson is from.