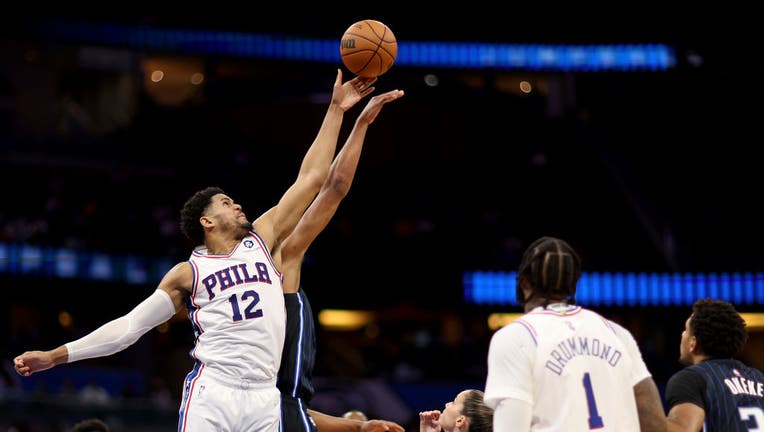 ORLANDO, FLORIDA - JANUARY 05: Tobias Harris #12 of the Philadelphia 76ers goes up for a jump ball during a game against the Orlando Magic at Amway Center on January 05, 2022 in Orlando, Florida. (Photo by Mike Ehrmann/Getty Images) NOTE TO USER: Use

The 76ers, who notched their NBA-best 14th road victory of the season, tied a season-high with a fifth straight win overall. They also defeated Orlando for a second time this season and a 10th straight time since 2016.

Seth Curry added 20 points, a season-high 12 assists, and seven rebounds, while Furkan Korkmaz scored 15 of his 20 points in the second half. Embiid, who scored at least 30 points for a fifth straight game, cupped his hands to his ears late in the game as fans inside the Amway Center repeatedly chanted, "MVP! MVP!"

Down 109-104 with 2:09 to play, Embiid was called for a flagrant foul on a hard hit to Wendell Carter Jr. However, the Magic center missed two free throws, Embiid blocked Cole Anthony's layup and the Sixers iced the game on two jumpers by Curry.

Orlando lost its seventh straight, its third such losing streak of the season. The Magic dropped to 2-14 at home after committing 19 turnovers, leading to 28 Philadelphia points.

Anthony, who played for the first time since Dec. 23 because of a sprained right ankle, hit a 3-pointer early in the third quarter to put Orlando up five. However, he landed on Mo Bamba’s heel and sprained his left ankle. He initially screamed out in pain and needed help getting off the floor.

Anthony scored 14 of his 26 points in the first half. Bamba finished with 19 points and eight rebounds.

Orlando led 89-88 at the end of three periods — just the seventh time all season it had been in such a position.

THE DOC IS IN

Coach Doc Rivers said he found out late Tuesday he had tested negative for the COVID-19 virus, and he flew into Orlando on Wednesday morning to rejoin the team. Rivers said members of the NBA’s coaching fraternity have tried to check up on one another and share tips.

"When you coach for a long time, you make a lot of friends, you talk to almost all (coaches), and you really talk to the ones you know," Rivers said. "A lot of frustration (among coaches). There were a few guys who were actually feeling poorly, and then there were a lot who were like, ‘I feel great,’ and they were frustrated they couldn’t get out there."

Rivers praised the work of assistant coach Dan Burke, who guided the Sixers to a 2-0 record during his absence.

"I feel great. I think I had two days (of not feeling well), but other than that, coaching from your living room is sweet," Rivers joked. "I know we are doing the (load management) with players, but we may have come up with something here for coaches."

76ers: Rivers said guard Tyrese Maxey and forward Matisse Thybulle remain out and in the NBA's health and safety protocols. "I know they’re feeling great," Rivers said. "This thing, as everybody knows, is individual. Some guys have struggled with it and some guys haven’t."

Magic: Thursday will be the one-year anniversary of point guard Markelle Fultz tearing the ACL in his left knee. The No. 1 pick from the 2017 NBA draft missed the final 64 games of last season and has yet to play this season. Magic coach Jamahl Mosley said Fultz has rejoined the team in some non-contact practice sessions, but the point guard is still in the rehabilitation phase. … Franz Wagner on winning the NBA’s Eastern Conference rookie of the month award: "It’s more like a team recognition for me. So many people have helped me every day."