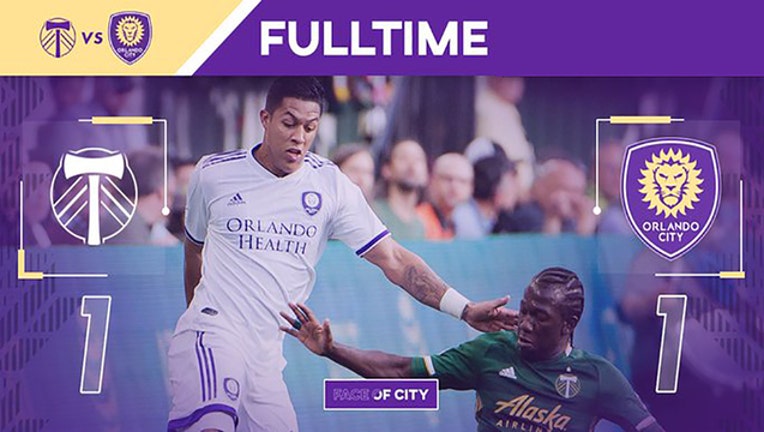 PORTLAND, Ore. (AP) - Jeremy Ebobisse scored on a header in the 83rd minute soon after subbing in to give the Portland Timbers a 1-1 tie with Orlando City on Thursday night.

Jorge Moreira crossed from the right wing to Sebastian Blanco, who lowered to flick a header behind him to the open Ebobisse.

Santiago Patino scored for Orlando off of a deflection in the box from Moreira in the 44th minute. Moreira intended to clear a cross out of the box, but it went right to Patino's feet in the middle of the box.

The Timbers played short-handed in the back. Marco Farfan was injured in a 2-2 draw with Colorado on Saturday, a game in which center back Julio Cascante was given a one-game suspension for a red card. Outside back Jorge Villafana also is working his way back from injury.

Orlando City goalkeeper Brian Rowe finished with three saves. In a crowded box, Blanco got off a left-footed shot on the ground in the 17th minute, but missed wide right. In the 37th minute, Blanco headed Diego Valeri's cross from the left wing, and though it got past Rowe's outstretched arms, it hit the crossbar and bounced close enough for Rowe to corral.  Rowe blocked another shot on goal in the 43rd, a near-post low line drive by Brian Fernandez.