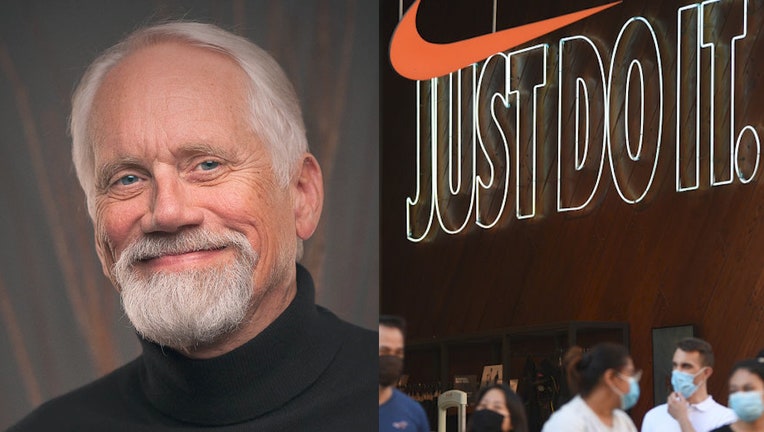 Dan Wieden (Credit: Wieden + Kennedy). Nike, Just Do It logo seen at a store on Gran Via street in Madrid. (Photo by Jorge Sanz/SOPA Images/LightRocket via Getty Images)

PORTLAND, Ore. - The man who coined Nike’s famous slogan "Just Do It." has died, according to the advertising agency which he co-founded.

Wieden+Kennedy said Dan Wieden passed away on September 30 with his wife by his side at his home in Portland, Oregon, at the age of 77.

There’s no word on the cause of death.

The independent ad agency said Wieden was born in March 1945 and graduated from the University of Oregon in 1967 with a degree in journalism. He worked in public relations before stepping into copywriting, which launched his advertising career.

He then met his late business partner David Kennedy at McCann, and they also moved to the William Cain agency, where one of their clients included the startup, Nike.

The two then founded their own ad agency in April 1982, with Nike being its only client.

Wieden famously coined the Nike tagline "Just Do It." in 1988.

"Wieden+Kennedy’s growth and success is proof of Dan’s vision—an independent, creatively led agency, founded to be different from the rest, making meaningful work for its clients," that agency said in a statement to FOX Television Stations. "A writer at heart, Wieden’s intention was never to create a huge advertising agency but rather to provide a place where people could do the best work of their lives."

Wieden was known for his philanthropy and received many awards. His family founded Caldera Arts, an arts and environmental summer camp in Central Oregon.

He is survived by his wife Priscilla Bernard Wieden, children, stepchildren and grandchildren. He is predeceased by his first wife Bonnie, who died in 2008.

The family has asked that gifts be made to Caldera Arts.