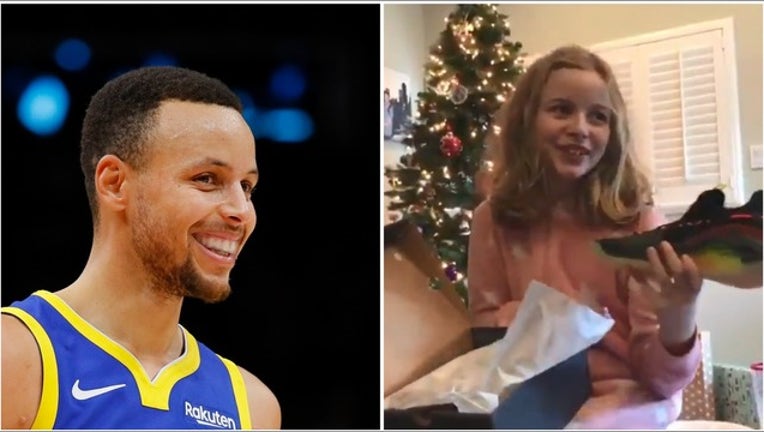 Steph Curry delivered on the third part of his promise to Riley Morrison, who asked the Warriors star why his shoes weren't available in girl sizes. (Getty Image)

(KTVU) - Warriors star Stephen Curry delivered on the third portion of his promise to a 9-year-old girl from Napa who sparked a viral discussion about why the two-time MVP’s shoes weren’t available in girl sizes.

The moment Riley Morrison opened her Christmas gift from Curry was captured on video shared with KTVU. Almost immediately, Riley asked her parents if they'd been holding onto the Under Armour shoes for a while. Her father, Chris Morrison, said it was suggested they wait until Christmas.

“Smart,” Riley said, with a smile.

About a month ago, Riley Morrison hand wrote a letter to Curry that her father shared on social media. Curry responded with his own loose-leaf note, saying he would see that the mistake is corrected immediately.

And he did. Within about a week, Riley had received her shoes and she was wearing them at practice with her Napa Valley Language Academy teammates. More importantly, the shoes became available online in girl sizes, a feat possibly delayed had Riley chose to find the equivalent on the boy’s side.

“I learned that everyone has a voice," said Riley, speaking to her school earlier this month. "And just by writing a letter, you can make a change, as you inspire people all over the world."

To recap, Curry said he'd do three things involving the shoes. He said he would make sure they were available in girl sizes and that Riley would get a pair of Curry 5s in her proper size and a pair of Curry 6s when they come out. He did all three.

But, if you recall to the champion's original post, Curry told Riley to make sure her schedule is free for International Women's Day in March.