Should the United States boycott Beijing’s Winter Olympics next February, China is prepared to respond.

On Tuesday, the U.S. State Department shot down rumors it was considering a boycott, despite pressure from human rights groups accusing China of atrocities against Uyghurs, Tibetans and some living in Hong Kong.

The next day, Zhao Lijian, a spokesman for China’s Foreign Ministry, said such a move would invoke a "robust Chinese response," the Associated Press reported.

"The politicization of sports will damage the spirit of the Olympic Charter and the interests of athletes from all countries," Zhao said. "The international community including the U.S. Olympic Committee will not accept it."

Zhao did not elaborate on what the response would be, but a look at how the country’s brief 2019 feud with the NBA might offer an idea into what he had in mind.

China took issue with the league after Daryl Morey, then the general manager of the Houston Rockets, tweeted support for demonstrators in Hong Kong.

In response, the Chinese Basketball Association suspended its relationship with the Rockets. Retailers yanked Rockets gear from their stores and the China Central Television canceled the broadcast of two NBA games.

Hong Kong protesters were rejecting a law that would have allowed extradition to jurisdictions with which Hong Kong did not have extradition agreements. They feared becoming subjected to the legal system of mainland China.

More recently, more than 1 million Uyghur and other predominantly Muslim ethnic minorities have been confined to camps in Xinjiang in China's northwest, according to foreign governments and researchers. Authorities there are accused of imposing forced labor and coercive birth control measures.

China rejects that characterization of the camps, claiming instead that they are used for job training and combating Islamic radicalism. 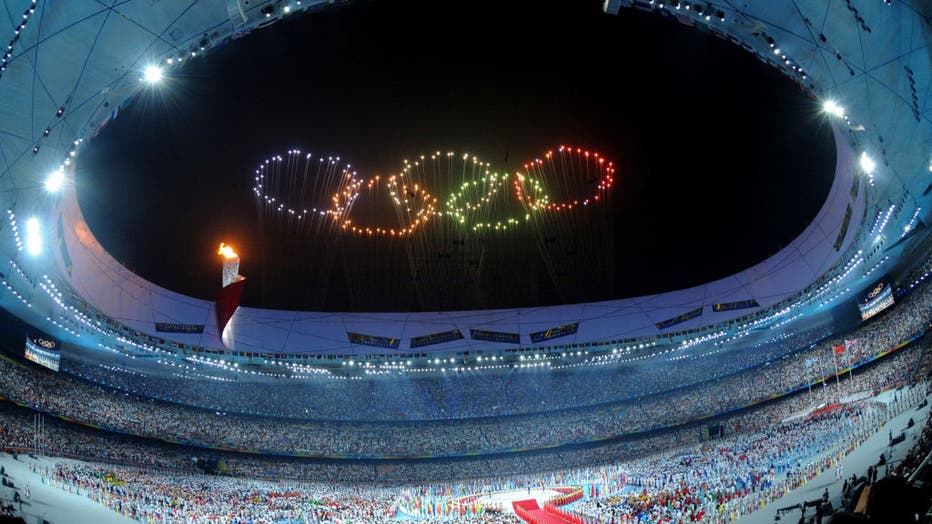 Photo taken on Aug. 8, 2008, shows the fireworks in the shape of Olympic rings during the opening ceremony of the Beijing Olympic Games held in the National Stadium, also known as the Bird's Nest, in Beijing, capital of China. (Photo by Ma Zhancheng/

Tibetans claim their country is independent, while the CCP claims it belongs to China, FOX News reported. A 2019 State Department report found that China regulates and controls all aspects of Tibetan Buddhism, including religious venues, groups, personnel and schools."

Some in the Tibet Autonomous Region (TAR) and other Tibetan areas have been subject to "forced disappearances, arrests, torture, physical abuse, including sexual abuse, and prolonged detentions without trial of individuals due to their religious practices," FOX News reported.

Presently, human rights groups have failed to get the winter games moved out of China amid the complaints of human rights abuses and are now encouraging national Olympic committees, athletes and sponsors to boycott.

RELATED: 2 wars and a pandemic: Here are all the times in history that the Summer Olympics were canceled

"Before we called for a boycott, we hoped that the IOC could strip China of hosting the Olympics, but they didn’t want to do that," exiled Chinese human-rights lawyer and activist Teng Biao said. "I think the Olympics is a thing the Beijing government cares very much about. We should not give up that chance."

There is precedent for an Olympic boycott. The United States led 65 nations, including China, in a boycott of the 1980 Moscow Olympics to protest the Soviet Union’s invasion of Afghanistan.

According to the Associated Press, another such demonstration would be welcomed by the Uyghurs.

"I think a diplomatic boycott would be very much welcomed by all of our communities. We have been looking towards accountability, and that is definitely part of that path toward accountability," said Zumretay Arkin, spokeswoman for the World Uyghur Congress.