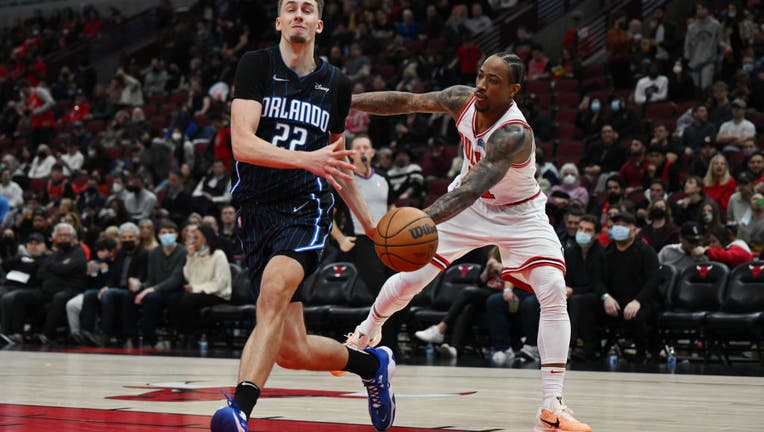 CHICAGO, ILLINOIS - FEBRUARY 01: DeMar DeRozan #11 of the Chicago Bulls knocks the ball away from Franz Wagner #22 of the Orlando Magic in the second half at United Center on February 01, 2022 in Chicago, Illinois. NOTE TO USER: User expressly acknow

DeRozan scored 20 of his points in the first half, and then the Bulls survived a frantic rally by the Magic midway through the fourth quarter.

Wendell Carter Jr. scored 24 points to lead the Magic, including 11 in the first quarter.

The Bulls, who were up 113-103 with 7:38 left in the game, failed to score a field goal in the next four minutes. The Magic tied the game, but LaVine’s baseline shot with 3:35 left snapped the Bulls’ drought and enabled them to regain a 117-115 lead.

Ayo Dosunmu made two shots to highlight an 11-0 run to finish the game.

DeRozan has scored 70 points in his last two games against the Magic.

The Bulls led the Magic by nine on three occasions in the third quarter, highlighted by a fadeaway shot by DeRozan with seven-seconds left for a 103-94 lead.

Baskets by Coby White and DeRozan enabled the Bulls to lead for the first time in double figures to open the fourth quarter.

Orlando shot 60.9% in the first quarter and made 28-of-50 field-goal attempts in the first half. But the Magic didn’t shoot their first free throw until 3:17 remaining in the second quarter, when Cole Anthony sank a shot to complete a three-point play.

The Bulls went on an 7-2 run in the final 1:09 to take a 70-63 halftime lead. Anthony was assessed a technical foul after hanging on the rim too long following his dunk of a missed shot.

DeRozan added two baskets, including a three-point play with 36.6 left, and Carter. Jr. was called for a technical after throwing the ball against the stanchion.

Magic: Anthony and rookies Franz Wagner and Jalen Suggs were selected to the Rising Stars game Feb. 18 at Cleveland, featuring the top first and second-year players. Coach Jamahl Mosley believes the honor also will serve as a learning experience during All-Star weekend. "You’re listening to other vets talk about their experiences," Mosley said. "And so it’s great for those guys to feel a part of that and get that understanding in the league as they grow."

Bulls: Javonte Green was cleared to play for up to 30 minutes, coach Billy Donovan said. Green is coping with a sore ankle. ... Dosunmu was selected to the Rising Stars game. "He’ll learn something from it," Donovan said, "And I think that will always be something that he’ll always do. It’s just kind of who he is as a person." ... Should the Bulls hold the best record in the Eastern Conference through Sunday, Donovan wo;; coach the East in the All-Star Game Feb. 20.

"It would be a great honor to be able to do something like that," Donovan said. "I think it speaks to the players on the team. It’s probably something we’d all share it because you got to finish in first place in the East."

Magic: At Indiana on Thursday night.

Bulls: At Toronto on Friday night.