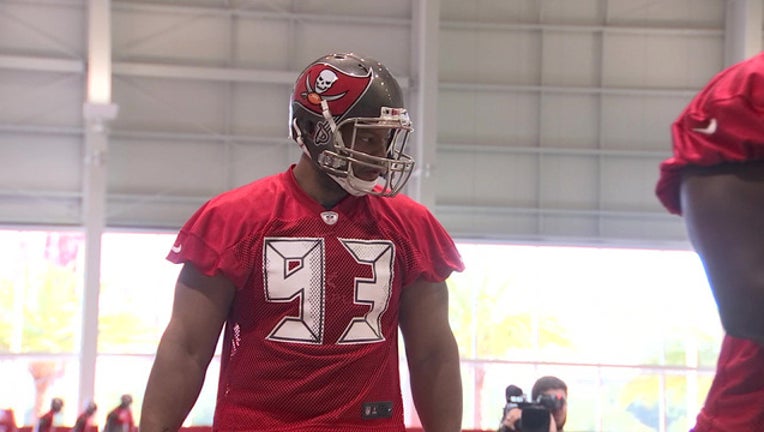 TAMPA, Fla. (FOX 13) - The changing of the guard is now a reality. There's a new Number 93 in pewter and red after Ndamukong Suh made his debut at One Buc Place.

“It was good,” said Bucs head coach Bruce Arians. "He came out and jumped right in. Very, very smart guy. He learned it really quick.”

Suh spent the first part of practice learning the Bucs’ new system. It didn't take long for the nine-year veteran to pick it up. The Bucs didn't make Suh available to talk about his first day on the new job, but his new teammate on the defensive line, Beau Allen, had plenty to say about what Suh brings to this team.

“I think he’s a really good veteran presence that’s kind of played in a lot of different positions in the NFL,” said Allen. "He’s played a lot of different schemes and I think he’s definitely created a reputation for himself and I can see where I think you’re trying to get me to go with this question. So, I think he brings some toughness and things like that.”

Upon signing Suh last week, Arians said he wanted to see 'that look' in Suh's eyes when he arrived at One Buc Place -- the look he had after crossing the line a couple of times during his career. Arians doesn't believe Suh plays with too much fire.

"Ain’t enough fire in the world,” smiled Arians. "Burn some guys around you.”

The Bucs won't really see what kind of impact Suh will make until he gets in pads during training camp. What they're looking to accomplish over this three-day minicamp is to have him ready to cut it loose come July.

Meanwhile, former Buc Gerald McCoy made his first appearance with his new team today after electing to sign with the Panthers.