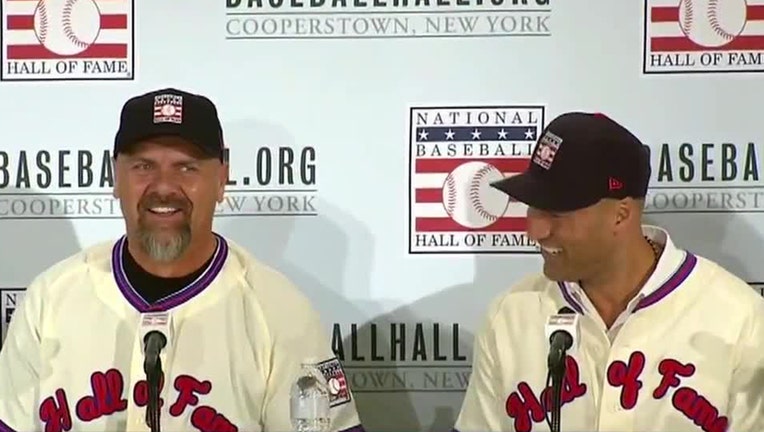 Wearing Hall of Fame jerseys and caps, Larry Walker and Derek Jeter appear at a press conference in New York to talk about being elected to the Hall of Fame, Jan. 23, 2020. (Via Pool)

COOPERSTOWN, N.Y. - The Baseball Hall of Fame has canceled its traditional outdoor induction ceremony for the second straight summer because of the COVID-19 pandemic and plans an indoor, televised event for former Yankees shortstop Derek Jeter and others being honored.

Jeter, Larry Walker, Ted Simmons, and the late Marvin Miller, who was a players' association executive, were supposed to have been inducted last summer but the Hall of Fame called off the ceremony for the first time since 1960.

"We had hoped to be in a position to welcome loyal baseball fans back to Cooperstown for Induction Weekend, but with the continuing uncertainties created by COVID-19, the Board of Directors has decided not to hold Induction Weekend ceremonies at the traditional Clark Sports Center location," Hall of Fame and Museum chair Jane Forbes Clark said in a statement. "We have prepared alternative plans to conduct our annual Awards Presentation and Induction Ceremony as television events taking place indoors and adhering to all of the required New York State guidelines."

This year's ceremony remains scheduled for July 25 but will look different. No new inductees were chosen for this year's class.

A crowd of about 55,000 attended the 2019 ceremony for the inductions of Mariano Rivera, Edgar Martinez, Roy Halladay, Mike Mussina, Lee Smith and Harold Baines.

Rivera was the first person to be unanimously elected. Jeter, his longtime teammate, fell just one vote short of unanimous.

The National Baseball Hall of Fame and Museum is open to the public every day from 9 a.m. to 5 p.m. with certain pandemic protocols in place.

Cooperstown is a village at the southern tip of Otsego Lake in central New York.