Duke coach Mike Krzyzewski refused to let his players ponder the possibility of facing North Carolina for the first time in the NCAA Tournament after the Blue Devils had punched their Final Four ticket with a win over Arkansas.

They have no choice but to think about it now.

The Tar Heels took care of the last of the underdogs Sunday by rolling past 15th-seeded Saint Peter's, setting up a Final Four for the ages in New Orleans: Duke-Carolina for the first time in the tourney, and in retiring Coach K's final appearance on college basketball's biggest stage. The winner gets Kansas or Villanova for the national championship.

"I saw something that Bill Self said about the regional championship game," Krzyzewski said of his Kansas counterpart, "it really is the biggest game a college coach has to coach, because it gets you into the promised land.

"For me to have that, I guess it’s 17 times now, that’s a big-time thing for me. I’m so proud of that," Krzyzewski said, "that my teams have put us in that position and that’s we’ve won now 13 of them, and whatever happens afterward happens. But it is a heck of a thing. We’ve won a lot in the tournament, and we’ve won a lot of games, but Final Fours are big."

The biggest could be Saturday night. 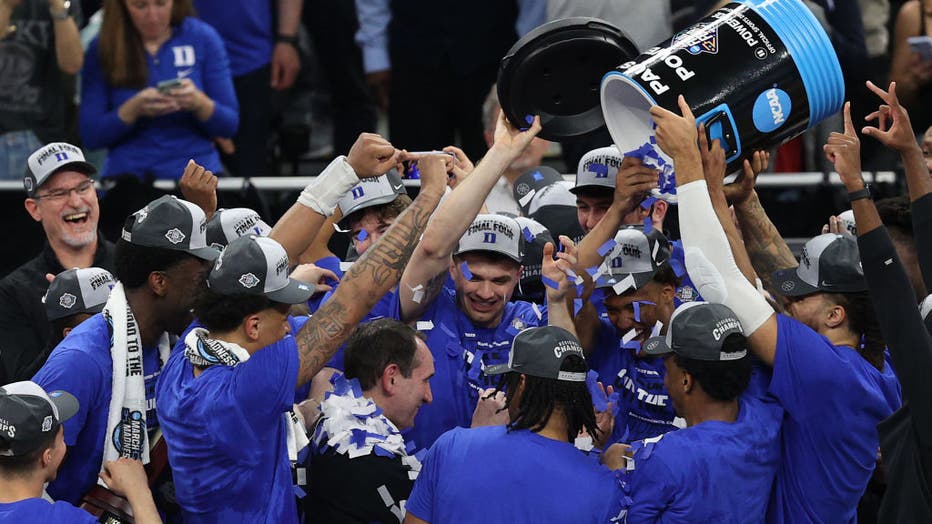 Duke and North Carolina have met 256 times, including in Krzyzewski's final game coaching at Cameron Indoor Stadium, when the Tar Heels spoiled the night with a victory that has helped to propel them to the Final Four.

Yet somehow, the bluest of the bluebloods have never collided in the NCAA Tournament.

"I'm not even thinking about that right now," said Hubert Davis, who played for the Tar Heels in the Final Four and has led them back in his first year as the head coach. "Right now, I'm just so happy for our guys having an opportunity to play in the Final Four. That's the only thing on my mind."

The Blue Devils locked up their spot Saturday night when Paolo Banchero and Co. used a big run to put away Arkansas and send Krzyzewski's farewell tour to the Big Easy. It will be his 13th trip to the Final Four, breaking a tie with UCLA's John Wooden for the most in history, and makes 17 in all for the Duke program.

"We knew we were capable of this, and that’s what we’ve worked for since June," Banchero said. "To finally get to New Orleans and have a chance to play for a national championship is a blessing. I’m just proud of the way we came together."

North Carolina will be making its record 21st appearance in the Final Four, and the four teams headed to the Superdome have combined to make it an astounding 61 times. Together, they have cut down the nets on 17 occasions.

Villanova also locked up its trip to the semifinals Saturday when it beat Houston in a low-scoring slugfest. It's the seventh Final Four appearance for the Wildcats, including one from the 1970s that the NCAA forced them to vacate, and gives Jay Wright a chance to join some rare company by winning his third national championship.

The list that would stand ahead of him? Wooden with 10, Krzyzewski with five and Kentucky's Adolph Rupp with four.

"It feels great to be going back to the Final Four. It never gets old," said Wright, whose 2016 team beat Kansas and North Carolina on the way to the title and whose 2018 team beat the Jayhawks again in the Final Four before topping Michigan for the championship. "It is a dream of every player and coach in college basketball. It’s the ultimate."

The Wildcats will be without Justin Moore, though, after announcing Sunday that their second-leading scorer would have surgery this week for a torn Achilles tendon. Moore was hurt in the final minute of the win over the Cougars.

"This is a tough blow for all of us, not just because of the great player Justin is, but because of what he means to us as teammates and coaches," Wright said. "As one of our captains, Justin has been an integral part of our success."

While the Jayhawks have had plenty of problems with Villanova over the years, their real trouble had been escaping the regional finals. But they had their way with Miami in the second half Sunday in Chicago, relying on their superior speed and athleticism to turn a six-point deficit at the break into a 76-50 blowout.

Now, the Jayhawks — who earlier in the tournament passed Kentucky as the winningest school in Division I basketball — are back to the Final Four for the 16th time, and Self is two wins away from his elusive second title.

"I’m just proud of my team and proud of Coach Self. It’s great for the program and the university," said Kansas guard Ochai Agbaji, a first-team All-American and the Big 12 player of the year. "But we’re not done yet. And I’m not satisfied yet with this. I know my teammates aren't, either."