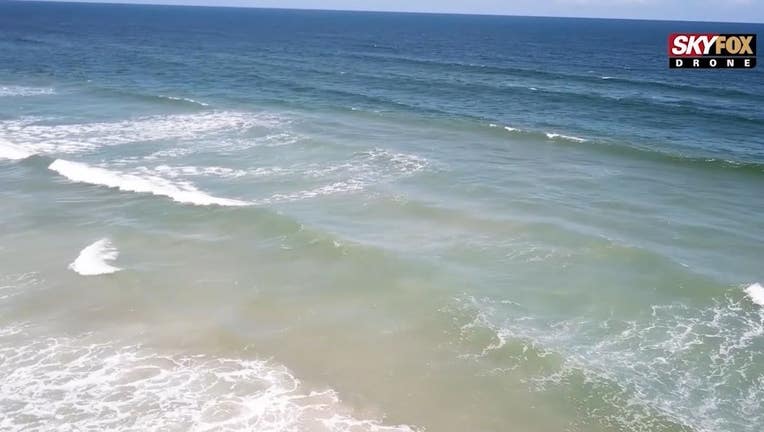 VOLUSIA COUNTY, Fla. - A 27-year-old woman was bitten by a shark Tuesday afternoon while swimming at New Smyrna Beach.

A deputy with the Volusia County Beach Safety Ocean Rescue said the woman was wading at New Smyrna Beach in waist-deep water near the Crawford beach approach when the shark bit her. Only the dorsal fin and tail were seen during the incident.

The woman's injuries were non-life-threatening, and she was transported to the hospital by ambulance. Officials said this is the seventh shark bite of the year.

Back in July, Florida recorded its sixth shark bite of the year — with three of them happening within the month of July.

A 13-year-old boy was bit in the face by a shark while lobstering. He had to get 10 stitches on his lip, which was split from the shark's bite.

A longtime Florida surfer was bitten in the foot by a shark in New Smyrna Beach after jumping off his surfboard. The shark got a hold of his foot and quickly let go. The 28-year-old told FOX 35 news he never saw the shark but estimated it was around five feet.

A teen who was scalloping with her brother was pulled underwater by an estimated 9-foot shark. The 17-year-old said she tried to pull the shark off of her leg with her bare hands. Her brother said once he saw the blood, he stepped in between his sister and the shark, hitting it two to three times until it finally took off. Her leg was seriously injured, and she had to undergo two surgeries as a result of the shark attack.

Florida has led the U.S. and the rest of the world in unprovoked shark bites for decades, and the trend continued in 2021, researchers said. Florida had 28 unprovoked bites last year, compared to 19 in the rest of the U.S. and 26 total outside the U.S. This is consistent with Florida’s most recent five-year annual average of 25 attacks. Of Florida’s 28 unprovoked bites, 17 were in Volusia County, which includes Daytona Beach.