NASA officials say the countdown to launch the Artemis I moon mission has resumed.

LAKE MARY, Fla. - NASA officials say the countdown to launch the Artemis I moon mission has resumed. At 9 a.m., NASA will give a pre-launch briefing. You can watch it in the live player above.

The mission management team met on Thursday to review the status of the operations and have given a "go" for a Saturday launch attempt of the Space Launch System (SLS) rocket and Orion spacecraft. It comes after technical issues scrubbed Monday’s attempt.

Teams worked to fix a leak on the tail service mast umbilical by replacing a flex-hose and a loose pressure sensor line, as the likely source of the leak. Teams also tightened the bolts surrounding that enclosure to ensure a tight seal when introducing the super-cooled propellants through those lines.  NASA it will adjust the procedures to chill down the engines, also called the kick start bleed test, about 30 to 45 minutes earlier in the countdown during the liquid hydrogen fast fill phase for the core stage.

The unmanned Artemis I  mission is supposed to be a test flight that will return a spacecraft to the moon's orbit after nearly five decades. The launch precedes Artemis II which will be the first crewed test flight to the moon since Apollo 17 in 1972.

"We are preceding into our Saturday launch attempt. We are comfortable with our risk posture. That said there is no guarantee that we are going to get off on Saturday, but we are going to try," Artemis mission manager Mike Sarafin said Thursday evening. "The technical teams have put in a tremendous amount of work in a very short amount of time to get us here."

Weather officers with the Space Force's 45th Weather Squadron continue to monitor an easterly flow off the Atlantic, which is expected to produce scattered showers and thunderstorms but the majority of the activity will be inland. 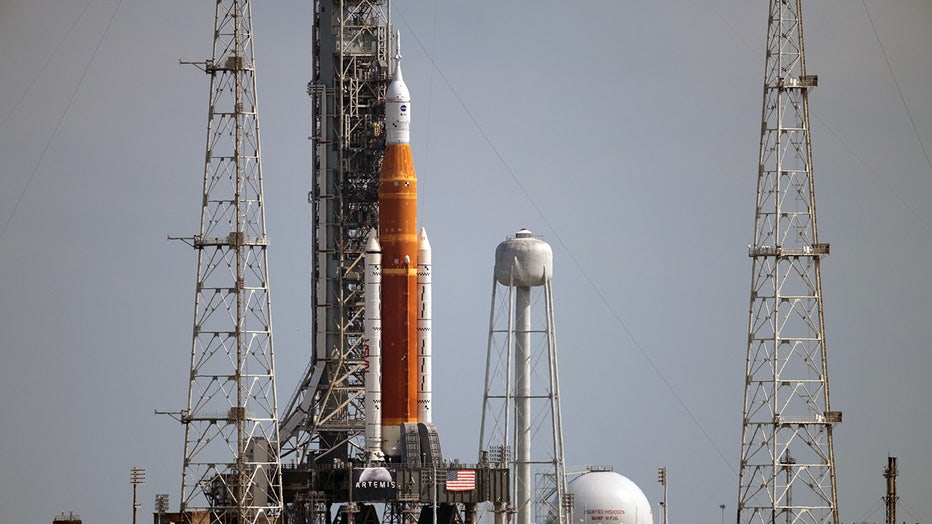 "The weather looks good. I wouldn't be shocked if there were periods where we are technically red for weather, but the bottom line is that I don't expect weather to be a show-stopper," Melody Lovin, weather officer with U.S. Space Force's Space Launch 45 group, told reporters.

The 120-minute launch window opens at 2:17 p.m.  If the launch scrubs on Saturday, depending on the reason for the delay, NASA could try again Monday at 5:12 p.m.

ARTEMIS I LAUNCH A BOON FOR BUSINESS

Labor Day weekend always brings a boost to beach towns like New Smyrna Beach, but now businesses are anticipating even more than space fans flock to the coast to watch history.

Local resident Lisa Meyers said people packed the beach Monday to watch the Artemis launch before it was scrubbed.  "There was just people sitting everywhere in their lawn chairs," she said. A lot of people had their cameras up and stuff."

While it’s not the Space Coast of Brevard County to the south, Meyers said the views are just as breathtaking with fewer crowds. "It’s beautiful to watch it from here, it's truly amazing and you don’t have to deal with as much traffic that’s closer to the Cape," she said.

The Breakers Restaurant, right off Flagler Avenue, opened up early Monday knowing people would come out. "We said why not open up a little early, get some people some drinks, you know, so we did a lot of bloody marys, mimosas, and it was just a great time," said manager Elliot Schaafsma.

With guaranteed holiday crowds and now space fans, Schaafsma said business will be booming on Flagler Avenue this weekend. "We’ll handle it. We always do and you know people come down to get a great burger and a great view," he said.