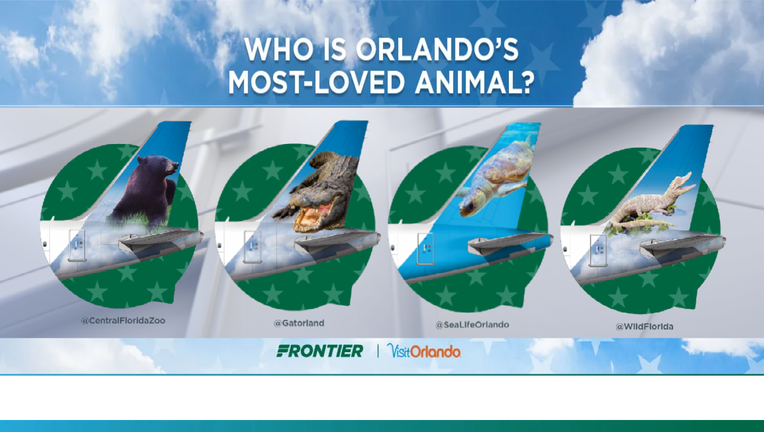 One of four Central Florida animals could be the next "face and name" of a Frontier Airlines aircraft, with its image painted on the tail.

People are invited to vote for one of the four entries to be "Orlando’s Most-Loved Animal." Voters are also entered to win $400 in Frontier Airlines flights.

ELLA THE FLORIDA BLACK BEAR: Ella, one of the Central Florida Zoo’s two Florida Black Bears, was born in the wild in February of 2014. Ella’s life was altered when she, and her brother, were illegally taken out of the state of Florida as cubs. They arrived at the Zoo in October of 2014.

LARRY THE AMERICAN ALLIGATOR: Larry was a popular, loved "resident" of The Villages retirement community. He was illegally fed, causing him to lose his natural fear of humans. At 12-foot, weighing 800lbs, this created a potential for a dangerous clash with Larry. Gatorland worked the trappers to catch him alive.  He was released in Gatorland’s main lake with other alligators.

TED THE LOGGERHEAD SEA TURTLE: Ted was raised as a hatchling by the National Marine Fisheries Service and became one of the first turtles to test the Turtle Excluder Device (TED).  TEDs are escape hatches in fishing nets that allow turtles to escape if they are accidentally trapped. Sea turtles are an endangered species which is why spreading awareness of Ted’s story is so vital. SEA LIFE Orlando Aquarium is proud of Ted for helping to protect sea turtles across the US.

FLURRY THE ALBINO ALLIGATOR: After years of failed attempts to produce offspring by albino alligator parents Blizzard and Snowflake, Wild Florida saw great success in 2019. From a clutch of 26 eggs, Flurry and his three siblings are the world's only albino gators hatched at a facility open to the public.