With baby Dylan now home, mom and dad are joining in on the TikTok fun for the first time together.

ORLANDO, Fla. - Baby Dylan is just two days out of the hospital and he's already an internet sensation.

"That last video that we posted had over 3.9 million views in 24 hours. Over 4,000 comments," his dad Chris Askew told FOX 35 News. The video that Chris posted on TikTok shows him dancing with several staff members from the Winnie Palmer Neonatal Intensive Care Unit as his wife Danielle is wheeled out of the hospital, proudly holding baby Dylan in their lap.

The Seminole County firefighter and dad who went viral on TikTok for dancing while his infant son was in the NICU, says his baby boy Dylan&nbsp;is home.&nbsp;

Dylan was born premature and spent 50 days in the hospital until he was strong enough to go home. With the help of extended family, Chris held up the fort at home while Danielle lived at the hospital with Dylan. Now, the family of six is living under the same roof.

"Goosebumps. There are no words that can explain how -- just a weight lifted, a load off my shoulders," Chris said.

Dylan is the couple's fourth son. The third to start his life in the NICU. "Its been a wild ride," Chris said.

Two days after Dylan was born, while Chris was doing some laundry at the Ronald McDonald House, he started watching videos on TikTok to take his mind off of things. Then, he decided to post a dance he had just seen, captioning it "dancing til my son leaves the NICU day one." 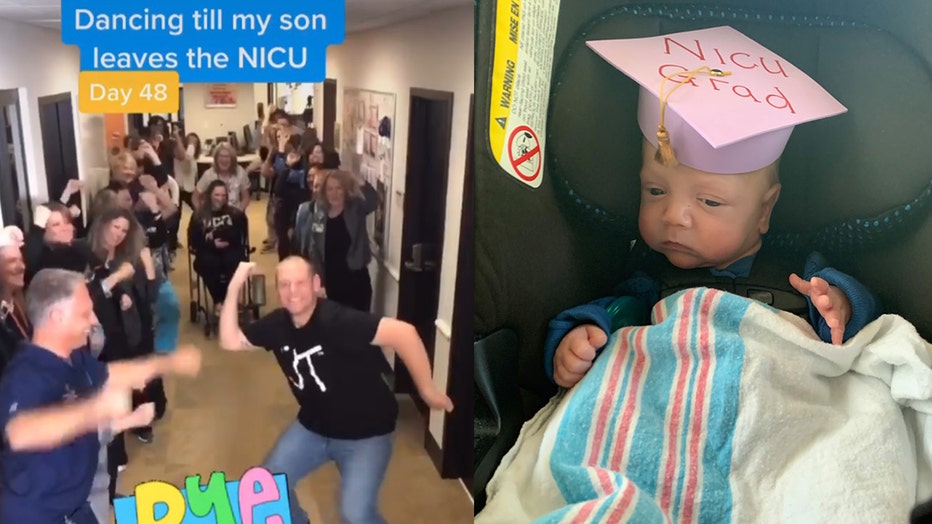 Danielle thought he was nuts when she saw his first post.

"I was very embarrassed. He does things to embarrass me a lot. I thought it would be that and then it took off and it made me proud because of everything that the people were saying and how many people enjoyed it and it touched," Danielle said. Then the couple saw that the first video had over 400,000 views overnight. So, as promised, Chris continued dancing all over town with whoever would join him. "Over 13 million, I hit in 28 days."

Danielle wound up becoming one of the biggest fans of her husband's videos.

"I would sit in a room by myself with him in his crib and just stare at him and stare at numbers on a screen that would just fluctuate and bounce around and then just worry the whole time and that was my entertainment," Danielle said. As she read messages of encouragement left by strangers and stories shared from other NICU families, it became even more than entertainment for Danielle. It became a source of camaraderie for her. "I got to read these messages and just know that people were doing the exact same thing and some were even two doors down from me. I met really amazing moms and other babies and I didn't feel so alone."

After two days of settling in with all of her boys, 52 days after Dylan's birth, the two are joining in on the TikTok fun dancing for the first time.

"He's got so many people behind him and in his corner. We're still fighting," Danielle said. She's hoping her baby Dylan, who is now six-pounds, seven ounces and growing, by the day will be an inspiration to other NICU families.

Tune in for more about the Baby Dylan's story and his dad's TikTok fame.