The Ukrainian military has released a statement thanking a marine for allegedly sacrificing himself in order to demolish a bridge that would allow Russian tanks to advance.

The General Staff of the Armed Forces of Ukraine released the statement Friday via social media, reporting that Vitaliy Volodymyrovych Skakun, a battalion engineer, had voluntarily undertaken a mission to mine out the support structure of the Genichesky Bridge near the Kyiv before Russian forces could cross it. Shakun did not have time to flee the blast zone before detonating the explosives, and informed his battalion that he would be blowing it up regardless.

The Armed Forces reported that the subsequent explosion was immediate and thwarted Russian efforts to mobilize their tank column over the bridge.

Ukraine forces blew up the bridge about 30 miles north of Kyiv on Thursday in order to thwart the advance of Russian tanks toward the capital city, according to reports. 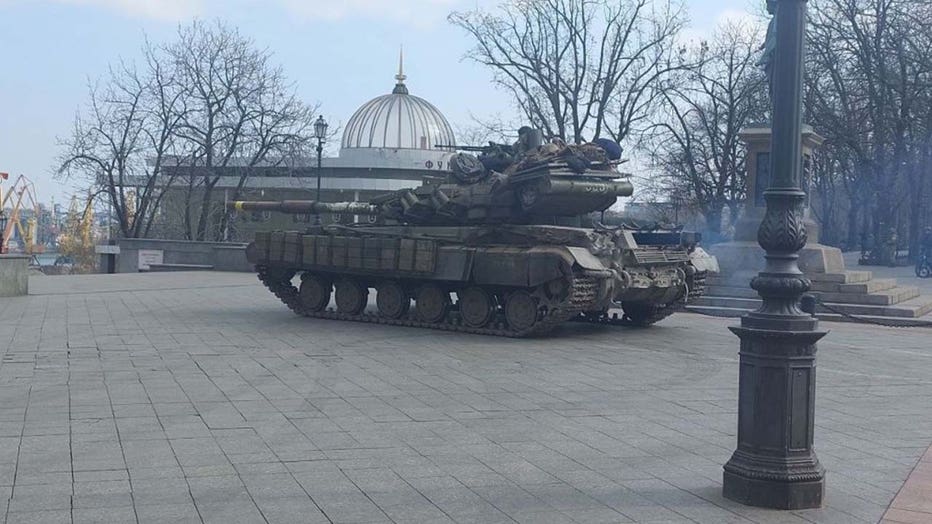 A Ukrainian military tank is seen near Potemkin Stairs in the centre of Odessa after Russia's military operation in Ukraine on Feb. 24, 2022.

"Horrific Russian rocket strikes on Kyiv. Last time our capital experienced anything like this was in 1941 when it was attacked by Nazi Germany," Kuleba said. "Ukraine defeated that evil and will defeat this one. Stop Putin. Isolate Russia. Severe all ties. Kick Russia out of [everywhere]."

A Ukrainian soldier on the ill-fated Snake Island was livestreaming as Russian warships opened fire and wiped out the 13 soldiers stationed there.

A Russian warship issued a warning to the Ukrainian border guards at Zmiinyi Island – also known as Snake Island – only to be told by one of the guards, "Russian Warship, go f--- yourself."

Zelenskyy hailed the 13 soldiers and said they would all receive the honor "Hero of Ukraine."