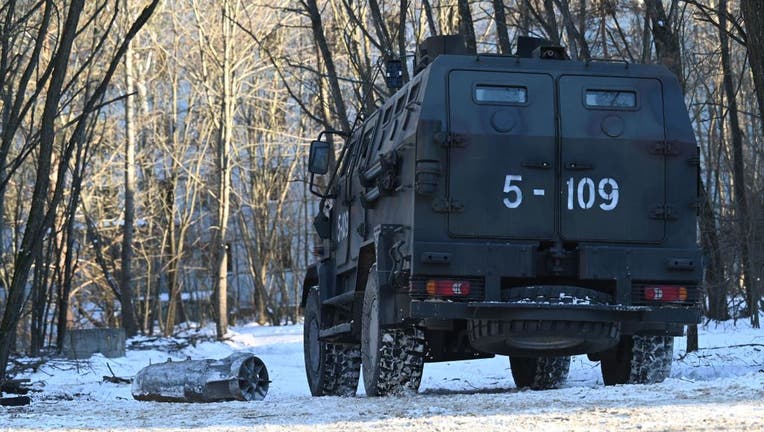 This photograph taken on February 4, 2022 shows an armoured vehicle as servicemen take part in a joint tactical and special exercises of the Ukrainian Ministry of Internal Affairs, the Ukrainian National Guard and Ministry Emergency in a ghost city o

The Chernobyl plant in Ukraine is disconnected from the grid due to damage inflicted by Russian occupying forces, sparking concerns of radioactive contamination if the cooling of spent nuclear fuel stops.

The 750 kV Chernobyl-Kyiv high-voltage line is currently disconnected "due to damage by the occupiers," Energoatom, or the state-run National Nuclear Energy Generating Company of Ukraine, said Wednesday. The Chernobyl station and all nuclear facilities of the Exclusion Zone are without electricity.

The regulator explained that there are about 20,000 spent fuel assemblies stored at the facility that require constant cooling. Without electricity to cool the pumps, the temperature in the holding pools will increase, prompting the release of radioactive substances into the environment.

"The only electrical grid supplying the Chornobyl NPP and all its nuclear facilities occupied by Russian army is damaged," Ukrainian Foreign Affairs Minister Dmytro Kuleba tweeted Wednesday.  "CNPP lost all electric supply. I call on the international community to urgently demand Russia to cease fire and allow repair units to restore power supply."

"Reserve diesel generators have a 48-hour capacity to power the Chornobyl NPP," he added. "After that, cooling systems of the storage facility for spent nuclear fuel will stop, making radiation leaks imminent. Putin’s barbaric war puts entire Europe in danger. He must stop it immediately!"

Wind can transfer the radioactive cloud to other regions of Ukraine, Belarus, Russia and Europe, according to Energoatom. Ventilation at the facility also won’t function without electricity, so some 210 captured technical personnel and guards who have been working to maintain the facility since Russian forces took control of the site two weeks ago risk exposure to radiation.

The fire extinguishing system is down, posing a dangerous risk if missiles were to strike the plant. Fighting is currently underway, making it impossible to carry out repairs and restore power, Energoatom said. The city of Slavutych is also without electricity.

The International Atomic Energy Agency (IAEA) said Ukraine informed them of the power loss at Chernobyl Nuclear Power Plant, and Director General Rafael Mariano Grossi said the development violated a key safety pillar on ensuring uninterrupted power supply. As of now, the IAEA does not see a critical impact on safety.

The IAEA had warned Tuesday that the same shift has been on duty at the Chernobyl NPP since the day before the Russian military entered the site of the 1986 accident on Feb. 24, meaning staff have in effect been living there for the past two weeks.

Grossi has repeatedly stressed that staff operating nuclear facilities must be able to rest and work in regular shifts, stating this is crucial for overall nuclear safety, the IAEE said. Their capacity to make decisions "free of undue pressure is among the seven indispensable pillars of nuclear safety and security" he outlined at a meeting of the IAEA’s Board of Governors on March 2.

"I’m deeply concerned about the difficult and stressful situation facing staff at the Chornobyl nuclear power plant and the potential risks this entails for nuclear safety," Grossi said in a statement. "I call on the forces in effective control of the site to urgently facilitate the safe rotation of personnel there."

Regarding the status of Ukraine’s operational nuclear power plants, the regulator said eight of the country’s 15 reactors were operating, including two at the Zaporizhzhya NPP controlled since last week by Russian forces, and that the plants’ personnel were working in shifts.