KYIV, Ukraine - Ukraine is seeking financial support for its military defense and has launched a website to request logistical and medical support for their armed forces amid an ongoing Russian invasion.

"Please donate the funds for logistical and medical support of the Armed Forces of Ukraine in UAH to the bank account of the Ministry of Defense of Ukraine," according to the website.

The website adds: "Due to numerous requests from individuals and legal entities who are not residents of Ukraine and wish to make donations (in foreign currency) for the logistics and medical support of the Armed Forces of Ukraine, the Ministry of Defense of Ukraine has set up a designated bank account."

Ukrainian President Volodymyr Zelenskyy said Friday that Sweden is providing military, technical and humanitarian assistance to the country. On Thursday he said any citizen who wanted a weapon to defend their country would receive one.

"We will give weapons to anyone who wants to defend the country. Be ready to support Ukraine in the squares of our cities," he wrote on Twitter. 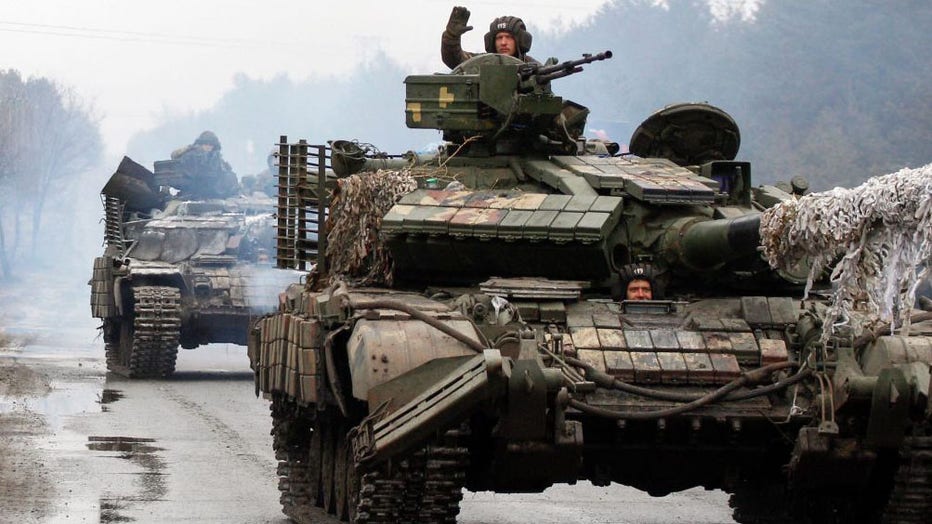 Ukrainian servicemen ride on tanks towards the front line with Russian forces in the Lugansk region of Ukraine on February 25, 2022. (Photo by ANATOLII STEPANOV/AFP via Getty Images)

Russian troops launched a large attack on Ukraine on Thursday, as President Vladimir Putin ignored criticism and sanctions from world leaders and warned other countries that any attempt to interfere would lead to "consequences you have never seen."

RELATED: Several explosions heard in Kyiv as Russia presses on with invasion of Ukraine

Ukraine's leadership said at least 40 people have been killed so far in what it called a "full-scale war" targeting the country from the east, north and south. In response, NATO envoys agreed to beef up air, land and air forces on the alliance's eastern flank near Ukraine and Russia.

Zelenskyy cut diplomatic ties with Moscow and declared martial law, saying Russia has targeted Ukraine’s military infrastructure. Ukrainians who had long braced for the prospect of an assault were urged to stay home and not to panic even as Ukrainian authorities reported artillery barrages and airstrikes on targets around the country.

Governments from the U.S. to Asia and Europe prepared new sanctions after weeks of efforts for a diplomatic solution — but global powers have said they will not intervene militarily to defend Ukraine.

Putin justified his actions in a televised address, claiming that the attack was needed to protect civilians in eastern Ukraine — a false claim the U.S. had predicted he would make as a pretext for an invasion. He accused the U.S. and its allies of ignoring Russia’s demands to prevent Ukraine from joining NATO and for security guarantees.

The Russian president also claimed that the country does not intend to occupy Ukraine but will move to "demilitarize" it and bring those who committed crimes to justice.

President Joe Biden in a written statement condemned the "unprovoked and unjustified attack," and he promised that the U.S. and its allies would "hold Russia accountable." The president said he planned to speak to Americans on Thursday after a meeting of the Group of Seven leaders. More sanctions against Russia were expected to be announced Thursday.

A spokeswoman for the U.N. refugee agency, Shabia Mantoo, said more than 100,000 people were believed to have left their homes in Ukraine and that "up to 4 million people may flee to other countries if the situation escalates."

The assault, anticipated for weeks by the West, amounts to Europe's largest ground conflict since World War II. It could also portend the emergence of a new "Iron Curtain" between the West and Russia, with global repercussions.

Zelenskyy appealed for defense assistance and tougher sanctions on Russia. U.S. President Joe Biden was to meet Friday with fellow NATO leaders in a virtual summit on Ukraine.

The Ukrainian president made another push for a diplomatic end to the fighting by offering to discuss with Russia the possibility of designating Ukraine a non-aligned country.

The Kremlin said it would evaluate the offer even as Russian troops continued their offensive on Kyiv. Western nations had rejected Moscow's demand for a halt to Ukraine's bid to join NATO over fears that the alliance would pose a risk to Russia's security. It was that rejection that Putin used to justify the invasion, claiming that the West left him no other choice.