USC and UCLA will be leaving the Pac-12.

LOS ANGELES - In a major shakeup for college sports, it appears the Pac-12 Conference will once again become the Pac-10 after the departure of two major California schools. 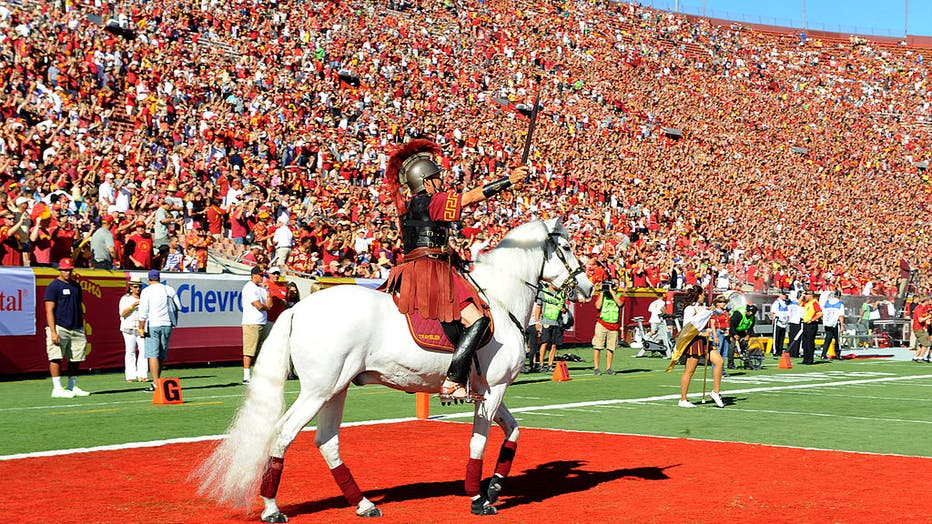 LOS ANGELES, CA - SEPTEMBER 01: USC mascot, Traveler, the noble white horse appears with a regal Trojan warrior astride prior to a game between the Hawaii Warriors and the USC Trojans at Los Angeles Coliseum on September 1, 2012 in Los Angeles, Calif

According to Jon Wilner, UCLA and the University of Southern California will leave the Pac-12 and will join the Big Ten Conference as early as 2024. Other schools in the conference include Ohio State, Michigan, Wisconsin, Northwestern, and Michigan State.

USC later confirmed Thursday afternoon that the Trojans are making the switch to the Big Ten.

"Over the past three years, we have worked hard to ground our university decisions in what is best for our students," said USC President Carol Folt in a statement. "With the Big Ten, we are joining a storied conference that shares our commitment to academic excellence and athletic competitiveness, and we are positioning USC and our student-athletes for long-term success and stability amidst the rapidly evolving sports media and collegiate athletics landscapes. We are delighted to begin this new chapter in 2024."

Around the same time, the Bruins also took to social media to confirm the "B1G" news:

The two elite California schools have produced numerous athletes who became legends in college sports, and many who went on to find success in the world of professional sports.

Legendary Laker Kareem Abdul-Jabbar, Clipper Norman Powell, Kevin Love, Bill Walton, Russell Westbrook, and Jamaal Wilkes are just some of the men who attended UCLA and went on to the NBA.