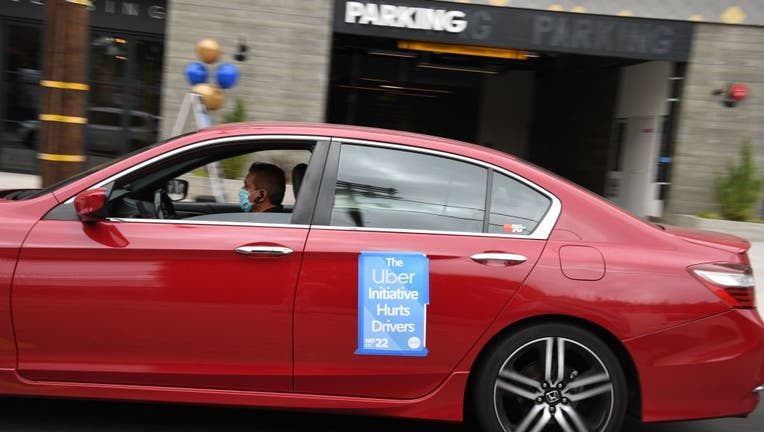 SAN FRANCISCO - Californians are being asked decide if Uber, Lyft and other app-based drivers should remain independent contractors or be eligible for the benefits that come with being company employees.

The battle between the powerhouses of the so-called gig economy and labor unions including the International Brotherhood of Teamsters could become the most expensive ballot measure in state history. Voters are weighing whether to create an exemption to a new state law aimed at providing wage and benefit protections to drivers.

Uber and Lyft have fought a losing battle in the Legislature and courts, so now — with help from app-based food delivery companies DoorDash, Postmates and Instacart — they are spending more than $180 million to take their fight directly to voters in the Nov. 3 election.

Early voting in California starts Monday. Uber and Lyft, both headquartered in San Francisco, have said they may leave the state if the measure fails.

The landmark labor law known known as AB5 threatens to upend the app-based business model, which offers great flexibility to drivers who can work whenever they choose. But they forego protections like minimum wage, overtime, health insurance and reimbursement for expenses.

“What’s at stake is the future of labor, the nature of work, how conditions are changing for households amidst the pandemic and recession,” said David McCuan, chair of California’s Sonoma State University political science department.

Labor-friendly Democrats in the Legislature passed the law last year to expand upon a 2018 ruling by the California Supreme Court that limited businesses from classifying workers as independent contractors.

Uber and Lyft have maintained that their drivers meet the criteria to be independent contractors, not employees. They also have argued the law didn’t apply to them because they are technology companies, not transportation companies, and drivers are not a core part of their business.

Attorney General Xavier Becerra took the companies to court, and a San Francisco Superior Court judge ruled the companies are subject to the new employment standards. But that ruling has been put on hold while the companies appeal.

Any ruling could be undone by the outcome of the vote, though further litigation is likely.

If Proposition 22 passes, it would exempt app-based transportation and delivery companies from the labor law and drivers would remain independent contractors exempt from mandates for overtime, sick leave and expense reimbursement.

But it also would put in place policies that require those companies to provide “alternative benefits,” including a guaranteed minimum wage and subsidies for health insurance if they average 25 hours of work a week.

Supporters say drivers enjoy the independence and flexibility of the current model.

“If I want to work four hours and say, ‘I’m done,’ I can do that,” said Doug Mead, a Palm Springs retiree who delivers meals for Uber Eats and Postmates and estimates he makes about $24 an hour. “Where is there an employer on the planet where I can do that?”

Opponents say the companies exploit workers and won’t end up delivering as much pay as proponents claim.

Saori Okawa, who for a year drove 10 hours a day, six days a week for Uber in San Francisco and now delivers food, said she wants more protections for drivers, many of whom are immigrants like her.

She figures she earned closer to $10 an hour after accounting for expenses that included renting a car for $1,000 a month. She said the hours were long and stressful, and she got into an accident that, had it resulted in injury, would have meant hospital bills and unpaid time off work.

“Before I went out to work I always prayed to God ... to protect myself,” Okawa said. “The traffic is crazy.”

The ride-hailing and delivery companies have spent more than $180 million, so far, to pass the measure, while labor groups have put up more than $10 million to defeat it.

McCuan said the companies are likely to put up another $100 million or more, making it more expensive in today’s dollars than a 1998 proposition that cleared the way to allow Native American tribes to operate casinos in California.

Most of the state’s largest newspapers, which benefited from exemptions for freelancers and a temporary reprieve for drivers who deliver their publications, have written editorials in support of the measure.

The San Francisco Chronicle called the measure imperfect but said it attempts to strike a balance between workers and the companies that “will keep the app-based, ride-hail and delivery services operating in California.”

“The legislative recalcitrance and lawsuits from labor-beholden politicians in the state capital, San Francisco and elsewhere give us no confidence that a reasonable solution could be reached if the initiative were to fail,” the paper wrote.

The coronavirus pandemic has hammered Uber and Lyft as more people work from home and don’t travel. On the other hand, more people are ordering food and grocery deliveries from app-based services such as Postmates and Instacart. Some gig workers have switched to those platforms for work, earning what they say are lower wages.

A majority of Uber and Lyft drivers interviewed over the course of an hour recently at Los Angeles International Airport said they support the measure, with all citing the freedom to set their own hours and work other jobs.

Jeff Hodge, a standup comic looking for his big break, sees pros and cons of both sides but being independent is a better fit for him.