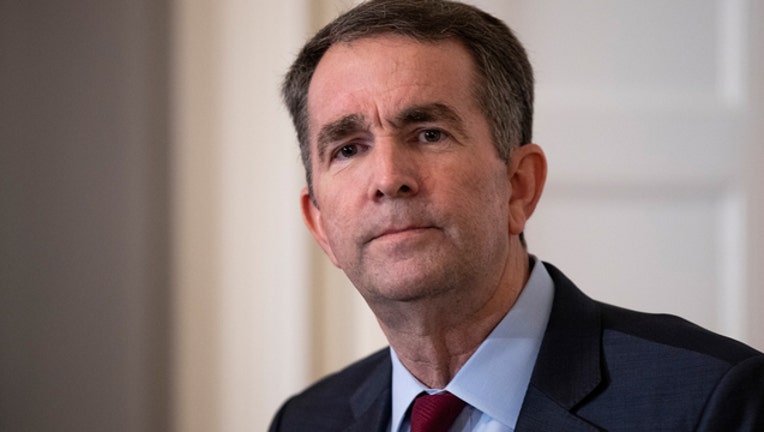 Virginia Governor Ralph Northam speaks with reporters at a press conference at the Governor's mansion on February 2, 2019 in Richmond, Virginia. (Photo by Alex Edelman/Getty Images)

WASHINGTON - (AP) -- The denunciations began within hours of the disclosure that Virginia Gov. Ralph Northam's medical school yearbook page featured a person in blackface standing next to a person in a Ku Klux Klan outfit. Democratic activists and presidential contenders quickly called for his resignation. By the time the Democratic governor held a press conference to defend himself, both the national and state party had also demanded he leave.

Northam has refused to step down so far -- he says he's not in the photo. But the pressure he faces highlights his party's insistence on policing its own when it comes to wrongdoing related to race and, in some cases, sexual misconduct. As the Republican Party has frequently shied away from disciplining or expelling its own members, Democrats have largely embraced a hard line.

That stance allows Democrats to draw a stark contrast with President Donald Trump and other Republicans who have made racist or sexist remarks. It's also a response to the demands of an increasingly diverse Democratic Party whose staunchest supporters are African-Americans and women, whose last president was a black man and who has two black people, one Latino and several women running for president.

"We can't call out Donald Trump, we can't call out Steve King, if we're not walking the talk," said Karine Jean-Pierre of MoveOn, a group founded in the late `90s to fight impeachment proceedings against President Bill Clinton over his affair with a White House intern.

The contrast with King, an Iowa Republican congressman, is one Democrats are eager to make. King had a long history of controversial rhetoric about immigrants, but it wasn't until he defended white supremacy in an interview with The New York Times last month that Republicans in Congress moved to strip him of committee assignments and called for his resignation.

Looming even larger is Trump, who fanned the racist conspiracy that Barack Obama wasn't born in the United States, said a federal judge couldn't rule on a lawsuit against him because he was "Mexican," has been accused of sexual wrongdoing by 19 women and reportedly used a profanity to describe countries that send black immigrants to the U.S.

When it comes to Trump, a 72-year-old white New York billionaire, contrast is everything for Democrats. On Tuesday, they'll answer his State of the Union address with a response from Georgia's Stacey Abrams, a 45-year-old who narrowly lost her bid last year to become America's first black female governor. They'll invite guests who represent key Democratic agenda items -- climate and the environment, immigration, LBGTQ rights, the plight of federal workers -- to watch from the gallery.

The distinction from Trump is especially crucial for Democratic presidential contenders. All the declared candidates -- and most of those eyeing a campaign -- called on Northam to resign. There have been precious few Northam defenders, but a handful argue he is being prejudged. Former Virginia Rep. Jim Moran decried "a rush to judgment" on CNN on Monday, while former Connecticut Sen. Joe Lieberman told the cable network that Northam "has a chance to prove what is his essence, not to rush him out of office for what is, unfortunately, political reasons."

RELATED: Eyes on Northam ahead of State of the Union as DC leaders, Democrats say Governor should step down

Some Democrats bristle at the notion that politics played any role in the revulsion at Northam. "Booting electeds from office who have worn blackface is not about purity," said Rebecca Katz, a Democratic strategist. "It's about what's right."

The last prominent elected Democrat pushed out of office by his own party was Al Franken, the Minnesota senator who resigned after weeks of internal pressure over sexual harassment allegations in 2017. The Franken departure came as Democrats were still smarting over Trump's election in the face of numerous sexual harassment and assault allegations. He was replaced in the Senate by another Democrat, Tina Smith, who was overwhelmingly re-elected in November.

Similarly, Democrats lose nothing by jettisoning Northam because they'd maintain control of the governor's mansion: The next in line is Democratic Lt. Gov. Justin Fairfax.

But the Virginia turmoil also illustrated the complications of the zero-tolerance approach.

Fairfax on Monday strongly denied allegations of sexual assault that were initially circulated on a conservative website, calling it a "smear."

The woman accusing Fairfax has retained Washington, D.C., law firm Katz Marshall & Banks and is consulting with the firm about next steps, said a person close to the legal team who was not authorized to speak publicly and spoke on the condition of anonymity. One of the firm's founding partners, Debra Katz, represented Christine Blasey Ford, who accused Supreme Court nominee Brett Kavanaugh of sexually assaulting her decades ago when they were teenagers. Kavanaugh denied the allegation and later was confirmed to the court.

The Associated Press is not reporting the Fairfax allegation because the AP has not confirmed it.

If Northam were to resign and Fairfax were not in position to assume the office, the governorship would go to the Democratic attorney general, a set of dominoes that has unleashed chaos in Virginia's capital.

Democratic presidential aspirants were notably silent on Fairfax. The party also stood with Keith Ellison as the then-congressman successfully ran for Minnesota attorney general last year despite allegations that he had abused an ex-girlfriend. Ellison also strongly denied those accusations.

In a sign of the crosscurrents Democrats are navigating, multiple liberals asked not to be quoted when discussing the contrast because they were skeptical of the allegations but did not want to be seen as disbelieving people who reported sexual misbehavior.

Still, the Northam case stands out, said Guy Cecil, head of Priorities USA, a major Democratic super PAC and one of the Democrats who immediately called for Northam's ouster when the yearbook photo first appeared.

"There's no question that we need to be thoughtful about when we're approaching these big questions, but I don't think we're nearing some sort of tipping point when we say a man who dressed in blackface in the `80s shouldn't be governor," Cecil said.