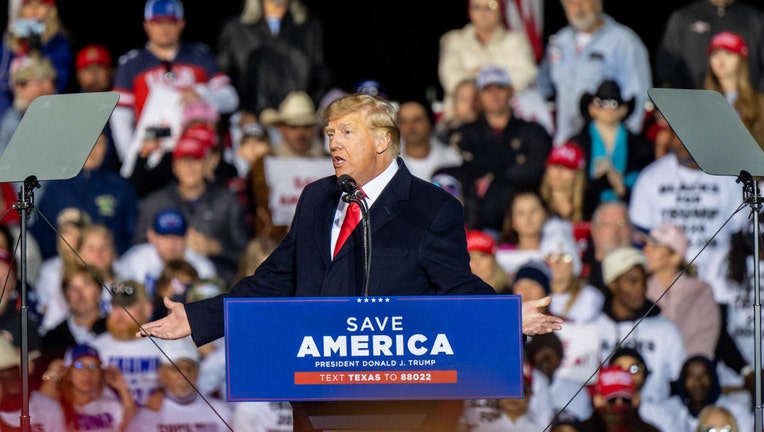 Former President Donald Trump speaks during the 'Save America' rally at the Montgomery County Fairgrounds on January 29, 2022 in Conroe, Texas. Trump's visit was his first Texas MAGA rally since 2019. (Photo by Brandon Bell/Getty Images)

Donald Trump spent months persuading a longtime ally to challenge Georgia's sitting Republican governor. This week, he gave David Perdue another boost, orchestrating a deal for a rival to drop his campaign and instead run for Congress with the former president's coveted endorsement.

"He said, ‘Listen, you have an opportunity. (What you could) do in the state level, you can do for this country,'" the candidate, Vernon Jones, said in an interview recalling his conversation with Trump. "And obviously he said I would have his support, because we share the same agenda."

Trump is attempting a similar strategy in other states. In North Carolina, for instance, he has pressed another Senate candidate to drop out and run for Congress. He is shopping for a Senate hopeful to back in New Hampshire.

In Ohio’s Republican Senate race, one contender withdrew last week after Trump made clear he would not offer his endorsement.

The moves are a reminder of the power Trump wields over the GOP on the eve of what could be a tumultuous primary season. The former president remains the most popular figure with the GOP base as he considers another bid for the White House.

He isn't hesitating to leverage that pull to exact revenge on his enemies and further bend the party to his will.
In the process, some Republicans say, Trump is injecting chaos into an election year that should otherwise be favorable to the GOP.

In Georgia, for example, Trump's effort to remove Jones from the governor's race was an attempt to prevent a potential runoff election. But in heading off that problem, he created another by pointing Jones to the race to succeed Rep. Jody Hice.

The primary field for Hice's seat was already crowded and the congressman, along with several Trump allies, had already made endorsements.

"It’s a mess. It’s just a mess," said Chip Lake, a GOP strategist in the state who warned that Trump endorsing so many candidates meant some were likely to lose.

"Everyone in Georgia wants to have Trump's endorsement, but Trump’s endorsement is certainly being stretched thin," he said, "We all know that when you throw stuff on the wall only some of it sticks."

A Trump spokesman did not respond to questions, but Trump has continued to tout his endorsement record as a measure of his political strength.

"We’re endorsing some fantastic people," he said in a call-in interview to Fox Business Network on Tuesday morning. "We want people that are going to put America first."

Trump and his aides had hoped his endorsements would clear the field in many races, avoiding costly and messy primary contests that might weaken the eventual Republican nominees. That worked in some cases.

In Wyoming, a slew of candidates dropped out after he announced his support for Harriet Hageman’s bid against a top Trump critic, Rep. Liz Cheney.

In Georgia, retired football star Herschel Walker is the leading contender for the GOP's Senate nomination after Trump encouraged him to run.

Walker's commanding position is particularly notable because, after some initial hesitation and troubling allegations that could hurt him in the general election, the Republican establishment, including Senate Minority Leader Mitch McConnell, also backed him in a rare alliance with the Trump wing of the party.

But Trump's interventions in the primaries threaten to deepen tensions within the GOP at a particularly sensitive point.
The party is reeling from the Republican National Committee's decision last week to censure two lawmakers who have repeatedly crossed Trump.

The RNC also blasted the Democrat-led House committee investigating the Jan. 6 insurrection as leading a "persecution of ordinary citizens engaged in legitimate political discourse." Many Republican senators and other party officials in Washington bemoaned the move as ill-advised, both substantively and politically.

Trump is not the first president to engage in politics after leaving the White House. Barack Obama has endorsed slates of candidates and stumped alongside some of them. George W. Bush has kept a lower profile but has supported Cheney, the daughter of his vice president and one of the lawmakers targeted by the RNC censure.

The volume of Trump's endorsements and the granularity of his work, however, is notable. In some instances, he began laying the groundwork for some of the arrangements when he was still in the White House.

In North Carolina, Trump has tried for several years to persuade Rep. Mark Walker to opt against a Senate run to clear a path for Rep. Ted Budd, whom the former president endorsed in June to the surprise of many.

Walker said Trump made his pitch in person twice — once in the Oval Office in 2019, with then-Vice President Mike Pence sitting to his left and acting White House chief of staff Mick Mulvaney to his right. He reupped the effort at his Mar-a-Lago resort in December.

"He did promise if we ran for the House that we would have the endorsement," Walker said. "And, look, I’m not an anti-Trump guy ... but with all due respect, I have to do what I believe in my heart to do."

Budd continues to trail the race’s frontrunner, former Gov. Pat McCrory, despite Trump’s endorsement and the backing of the conservative Club for Growth’s super PAC, which has poured more than $4.3 million into the race.

Walker is staying in the race, regardless of Trump’s pressure.

"I don’t want to give the impression that someone’s outside with a crowbar, slicing my tires if we don’t do the right thing," he said. "They’ve been respectful about it."

Meanwhile, frustrations are mounting among some Trump allies about his foot-dragging in other primaries, including Ohio’s crowded Senate race, where military and overseas absentee voting is set to begin next month.

Trump didn't offer an endorsement but succeeded in culling the field last week when candidate Bernie Moreno announced he was dropping out after a meeting with Trump in which he asked for an endorsement. Trump declined.

Elsewhere, Trump is still searching for favored candidates. In New Hampshire, where the 2016 primary helped propel his presidential campaign, Trump is struggling to find a candidate he wants to back in the closely watched Senate race.

Longtime Trump lieutenant Corey Lewandowski, who was removed from his role overseeing Trump's super PAC amid allegations of sexual harassment, said he’s been asked to identify a strong Republican candidate, and, so far, it’s not going well.

"It’s clear there is no standout America First candidate in the race," he said. "But it’s a very winnable seat for the GOP in 2022."

And in some races, Trump's endorsement has sent sparks flying.

In Tennessee, some Trump allies have been seething at his endorsement of former State Department spokesperson Morgan Ortagus before she even announced her congressional candidacy. The move frustrated high-profile supporters who had already endorsed Robby Starbuck, a longtime Trump supporter.

"Typically when President Trump makes an endorsement, people jump on ... and they're generally very supportive. So it's interesting to see the reaction be so wildly in a different direction," Starbuck said of the backlash. "It’s not that his endorsement doesn’t matter. It's that people can see mistakes can happen and he’s human and he made a mistake on this one."