Trump claimed in 2011, 2012 tweets that Obama would start war with Iran to get reelected

President Donald Trump, currently facing an impeachment trial in the Senate while aiming for reelection in 2020, claimed in 2011 that then-President Barack Obama would start a war with Iran to get reelected.

WASHINGTON - President Donald Trump, currently facing an impeachment trial in the Senate while aiming for reelection in 2020, claimed in 2011 that then-President Barack Obama would start a war with Iran to get reelected.

In the same month, Trump expressed the sentiment in a video blog posted on Nov. 16, 2011.

“Our president will start a war with Iran because he has absolutely no ability to negotiate. He's weak and he's ineffective. So the only way he figures that he's going to get reelected — and as sure as you're sitting there — is to start a war with Iran,” Trump said in the video, that has since been re-posted by a Washington Post video editor.

A couple of days prior, he tweeted, “@BarackObama will attack Iran in the not too distant future because it will help him win the election.“

The unearthing of the nearly decade-old tweets and video came after Trump ordered the killing of Gen. Qassem Soleimani, the commander of Iran’s Quds Force. He was killed in a U.S. strike early Friday.

The following year, in 2012, Trump doubled down on the claims about Obama.

On April 4, 2012, he tweeted, “Remember what I said about @BarackObama attacking Iran before the election—I hope the Iranians are not so stupid to let it happen—now is the time for them to negotiate—'never overplay your hand.'“

"Just as I predicted, @BarackObama is preparing a possible attack on Iran right before November," he tweeted on July 3, 2012, referring to a New York Times report on the U.S. adding forces in the Persian Gulf.

He didn’t stop there.

“.@Israel could very well be close to attacking Iran. Could be this election’s big October surprise...” Trump tweeted on Aug. 16, 2012.

On the same day, he tweeted, “I always said @BarackObama will attack Iran, in some form, prior to the election.”

On Oct. 9, 2012, Trump tweeted, “Now that Obama’s poll numbers are in tailspin – watch for him to launch a strike in Libya or Iran. He is desperate.”

Later that month, he tweeted, “Don't let Obama play the Iran card in order to start a war in order to get elected—be careful Republicans!“

Trump’s strike against Soleimani marked a major escalation in the conflict between Washington and Iran, as Iran vowed “harsh retaliation" for the killing of the senior military leader.

The two nations have faced repeated crises since Trump withdrew from the 2015 nuclear deal and imposed crippling sanctions. 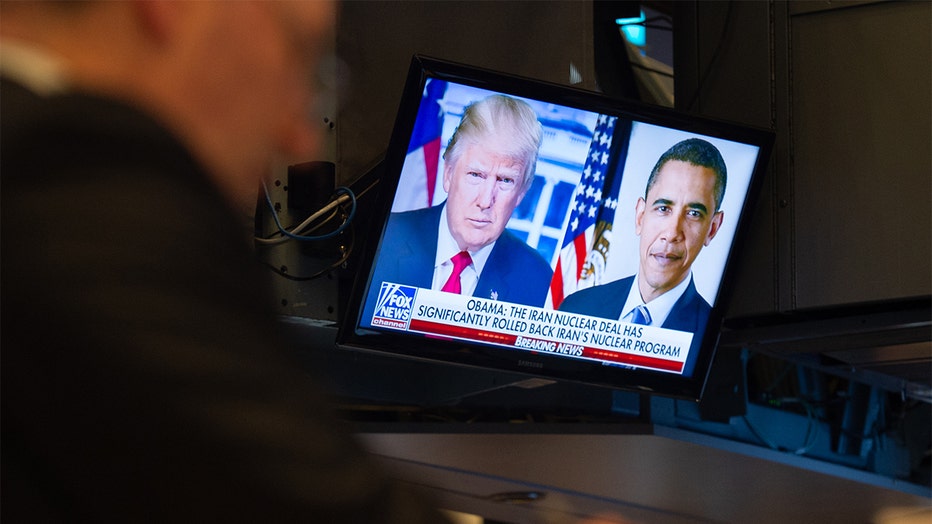 U.S. President Donald Trump and former President Barack Obama portraits are on television as traders work on the floor at the closing bell of the Dow Industrial Average at the New York Stock Exchange on May 8, 2018 in New York. (Photo by BRYAN R. SMI

The U.S. urged its citizens to leave Iraq “immediately” as fears mounted that the strike and any retaliation by Iran could ignite a conflict that engulfs the region.

Defense officials said Friday that the U.S. is sending nearly 3,000 more Army troops to the Mideast as reinforcements in the volatile aftermath of the killing of the Iranian general.