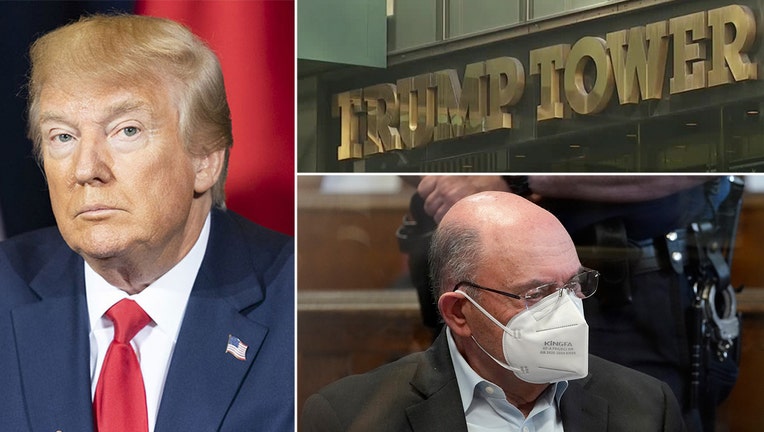 Lawyer Bryan Scarlatos made the remark during Trump Organization CFO Allen Weisselberg's first court appearance since his July 1 arraignment on tax fraud charges. Scarlatos did not say what led him to believe more people would be charged.

In recent weeks, a pair of Trump Organization executives have testified before a grand jury in the case. Under New York law, grand jury witnesses are granted immunity and can not be charged for conduct they testify about.

Scarlatos raised the issue of more possible indictments while arguing for more time to review up to 6 million pages of documents that he said prosecutors are turning over as evidence, calling it "a herculean task" and saying new indictments would create a "moving target."

Prosecutors said Weisselberg is "no stranger" to many of the documents because they include Trump Organization business records that the executive likely produced or reviewed as part of his job.

Judge Juan Manuel Merchan gave both sides until next spring to file motions and responses. He said he'd decide on motions at a July 12, 2022, hearing, the next time Weisselberg is due in court.

Merchan said he expected to set a trial date at that time and would likely schedule it for the end of August or beginning of September next year.

"The reason I mention it now is that it's on everybody's radar," Merchan said. "I don't have an exact date yet."

Weisselberg has pleaded not guilty to charges he collected more than $1.7 million in off-the-books compensation, including apartment rent, car payments and school tuition.

Trump's company is also charged in the case, which prosecutors have described as a "sweeping and audacious" tax fraud scheme.

One of the Trump executives granted immunity to testify before the grand jury is the company's director of security, Matthew Calamari Jr. Prosecutors have been looking at him and his father, Trump chief operating officer Matthew Calamari Sr., in their probe of untaxed benefits.

A lawyer for the Calamaris said in a statement responding to Scarlatos' remarks that he was not aware of any plans to indict the elder Calamari.

"We remain in discussions with the district attorney's office relating to Matthew Calamari (Sr.), but continue to believe there is no basis for indicting him," lawyer Nicholas Gravante said. "If they presently intended to indict him, I would have been informed. I haven't been and, in fact, have been informed to the contrary."

Weisselberg sat quietly next to his lawyers at Monday's brief hearing and didn't speak to reporters on his way to and from court. Because of the coronavirus pandemic, everyone wore masks and the courtroom had clear plastic partitions between various parties.

Trump himself has not been charged with any wrongdoing. He has condemned the case, the first to arise from New York authorities' two-year investigation into the former president's business dealings, as a "political Witch Hunt."

Trump has said his company's actions were standard practice in the business and in no way a crime.

According to the indictment, from 2005 through this year, the Trump Organization and Weisselberg cheated tax authorities by conspiring to pay senior executives off the books by way of lucrative fringe benefits and other means.

Weisselberg alone was accused of defrauding the federal government, state and city out of more than $900,000 in unpaid taxes and undeserved tax refunds.

The most serious charge against Weisselberg, grand larceny, carries five to 15 years in prison. The tax fraud charges against the company are punishable by a fine of double the amount of unpaid taxes, or $250,000, whichever is larger.

Weisselberg's lawyers, Skarlatos and Mary Mulligan, said in a statement after Monday's hearing that the indictment is "full of unsupported and flawed factual and legal assertions."

"We look forward to challenging those assertions in court," the lawyers said.

The 74-year-old Weisselberg has intimate knowledge of the Trump Organization's financial dealings from nearly five decades at the company. The charges against him could enable prosecutors to pressure him to cooperate with the investigation and tell them what he knows, but so far there have been no signs of that.

The Trump Organization is the entity through which the former president manages his many ventures, including his investments in office towers, hotels and golf courses, his many marketing deals and his TV pursuits.

According to the indictment, Weisselberg paid rent on his Manhattan apartment with company checks and directed the company to pay for his utility bills and parking, too.

The company also paid for private school tuition for Weisselberg's grandchildren with checks bearing Trump's signature, as well as for Mercedes cars driven by Weisselberg and his wife, and gave him cash to hand out tips around Christmas.

Such perks were listed on internal Trump company documents as being part of Weisselberg's compensation but were not included on his W-2 forms or otherwise reported, and the company did not withhold taxes on their value, prosecutors said.

Trump's company also issued checks, at Weisselberg's request, to pay for personal expenses and upgrades to his homes and an apartment used by one of his sons, such as new beds, flat-screen TVs, carpeting and furniture, prosecutors said.