Georgia Secretary of State under fire

Georgia's senators are calling for the resignation of the Secretary of State calling the recent elections embarrassments.

ATLANTA - The Trump campaign is requesting the Georgia Secretary of State hand-count all ballots in the state's recount effort.

In a statement, U.S. Rep. Doug Collins, who was tapped to lead Trump's recount effort in the state, released three formal requests to Georgia Secretary of State Brad Raffensperger connected to the upcoming recount.

Collins asked for a "full comparison" of absentee ballots, in-person, and provisional ballots cast in Georgia as well as a check for any votes cast by ineligible persons, including felons.

The Trump campaign's third request was for Raffensperger's office to "announce a full hand-count of every ballot cast in each and every county due to widespread allegations of voter irregularities, issues with voting machines, and poll watcher access."

Collins said the campaign would petition for the three requests in court if Raffensberger failed to act, "but we are hopeful he will preemptively take this action today to ensure every Georgian has confidence in our electoral process.”

The statement comes after U.S. Sens. David Perdue and Kelly Loeffler called for the Secretary of State's resignation, accusing Raffensperger of “mismanagement and lack of transparency.”

Perdue and Loeffler offered no evidence and gave no specific examples of illegal votes or fraud, and their campaigns did not respond to requests for further comment. Raffensperger flatly declined to step down, saying in a statement, “That is not going to happen.”

The counting in wrapping up in Georgia and now the certification begins.

The statewide elected Republican said his office is investigating any specific reports of illegal votes, but officials don’t expect to find any significant problems.

“Does it rise to the numbers or margin necessary to change the outcome to where President Trump is given Georgia’s electoral votes? That is unlikely,” Raffensperger said.

Rep. Doug Collins, who has been tasked on behalf of the Georgia Republican Party and the Donald J. Trump for President Campaign to oversee a recount in Georgia, speaks with FOX 5 senior anchor Russ Spencer.

Elected in 2018, Raffensperger has overseen the rollout of Georgia’s new voting system, which features touchscreen machines that print paper ballots read by a scanner. After the coronavirus pandemic began, he strongly encouraged voters to vote by mail, despite criticism from other Republicans.

Loeffler and Perdue, who face a pair of Jan. 5 runoffs against Democrats that will determine party control of the U.S. Senate, accused Raffensperger of “mismanagement and lack of transparency.”

“The Secretary of State has failed to deliver honest and transparent elections,” they said in a joint statement. “He has failed the people of Georgia, and he should step down immediately.” 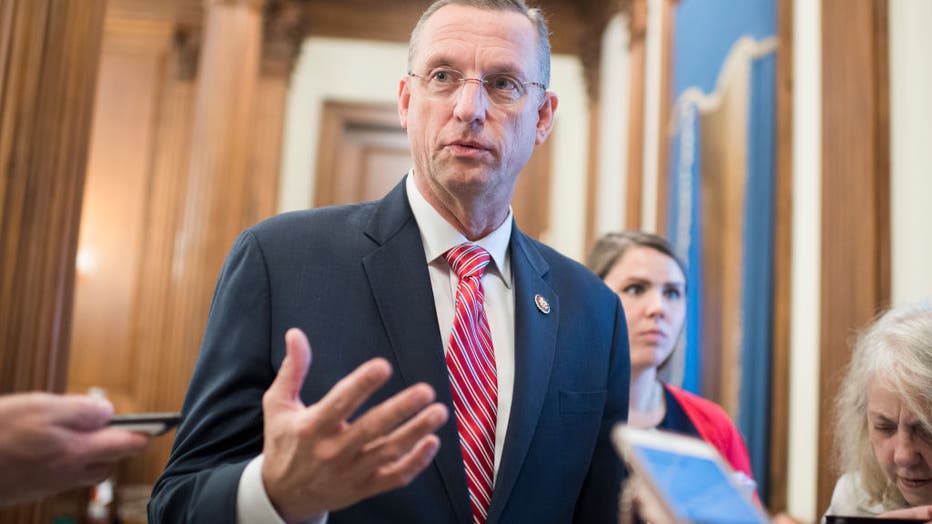 Rep. Doug Collins talks with reporters during the last votes of the week in the Capitol in 2019.

Other Republicans have been more cautious, with Gov. Brian Kemp, House Speaker David Ralston and Lt. Gov. Geoff Duncan all supporting the accuracy of the count in a joint Friday statement.

On Monday, however, Kemp spokesperson Cody Hall said the Republicans’ concerns should be “a wake-up call” for Raffensperger to examine “any and all” fraud allegations.

Kemp, a former secretary of state who oversaw the 2018 elections while he was running for governor, came under intense fire from Democrats and outside voting groups. Kemp narrowly defeated Democratic challenger Stacey Abrams, but she refused to explicitly concede, alleging systemic voter suppression by Kemp.

Raffensperger’s office said officials are confident in the results of the 2020 election.

“The facts are the facts, regardless of outcomes,” Gabriel Sterling, who oversaw the implementation of the new voting system, said at a news conference. He said he wanted everyone to understand “that in Georgia we had an actual accurate outcome.”

Rep. Doug Collins discusses his role in the Georgia recount and what he expects from the Secretary of State's Office.

He debunked examples of what he characterized as misinformation about problems that occurred as votes were counted in several counties in the state.

While Sterling was speaking at the Georgia Capitol, U.S. Agriculture Secretary Sonny Perdue was laying out the GOP recount strategy to House Republicans in the same building. Perdue, a former Georgia governor, is the cousin of David Perdue.

Recounts rarely change outcomes in races where a candidate leads by thousands of votes. By Monday, 55 of Georgia’s 159 counties had submitted certified, final results, including Gwinnett County, the state’s second-most populous county.

“We must count every legal vote and cast out every illegal vote in the state of Georgia,” Sonny Perdue said.

Perdue said the GOP is trying to flip the deficit before the state certifies overall results.

“We obviously know the President is currently trailing in Georgia,” Sonny Perdue said. “We do believe that Georgia may be his best chance of reclaiming that lead and helping secure the electors he needs to be reelected.”

Trump expressed that confidence himself, tweeting on Monday afternoon that “Georgia will be a big presidential win, as it was the night of the Election!”

As of Tuesday morning, Biden was leading Trump in the state by over 12,000 votes.