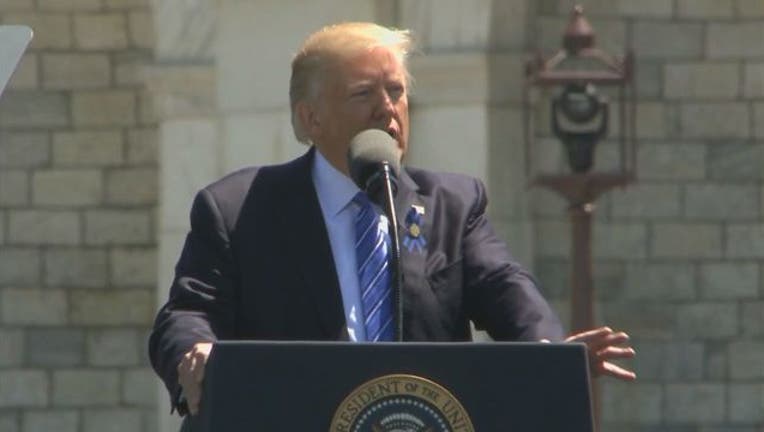 BETHLEHEM, West Bank (AP) - President Donald Trump on Tuesday condemned the "evil losers" responsible for a deadly attack on concert-goers in England and called on leaders in the Middle East in particular to help root out violence.

"The terrorists and extremists and those who give them aid and comfort must be driven out from our society forever," Trump said in Bethlehem alongside Palestinian Authority President Mahmoud Abbas. "This wicked ideology must be obliterated."

Trump spoke on his fourth and final day in the Middle East. After meetings with Arab leaders in Saudi Arabia, the president has been pushing the prospect of peace between Israelis and Palestinians.

He said an agreement with Israel could "begin a process of peace all throughout the Middle East."

Abbas said he was keen to "keep the door open to dialogue with our Israeli neighbors." He reiterated the Palestinians' demands, including establishing a capital in East Jerusalem, territory Israel claims as well, insisting that "our problem is not with the Jewish religion, it's with the occupation and settlements, and with Israel not recognizing the state of Palestine."

Palestinians, Abbas said, want to focus on building their institutions along with a "culture of peace and denouncing violence" while building bridges instead of walls."

The White House said Trump was being updated on the attacks in Manchester, England, by his national security team. More than 20 people were killed by an apparent suicide bomber. There was no immediate claim of responsibility.

"So many young, beautiful innocent people living and enjoying their lives, murdered by evil losers in life," Trump said, echoing the theme he presented during his meetings with Arab leaders in Riyadh, Saudi Arabia. The White House said it was Trump's idea to use the term "evil losers."

Trump declared that he would not call the attackers "monsters," a term he believes they would prefer, instead choosing "losers," a longtime favorite Trump insult and one he has directed at comedian Rosie O'Donnell, Cher and others..

To get to Bethlehem from Jerusalem, Trump's motorcade passed through streets lined with heavily armed security forces and an opening in Israel's towering separation barrier, a visual reminder of the complexities of the conflict in the region. Israel built the barrier a decade ago, saying it was a defense against Palestinian militants who carried out deadly attacks. Palestinians say the barrier is a land grab because it slices off 10 percent of the West Bank.

Trump was returning to Jerusalem later Tuesday to visit the Yad Vashem Holocaust memorial and deliver remarks. He'll then head to Rome for a meeting Wednesday at the Vatican with Pope Francis.

Trump's visit to Jerusalem has been laden with religious symbolism. He toured the Church of the Holy Sepulchre, which by Christian tradition is where Jesus was crucified and the location of his tomb. Wearing a black skullcap, he became the first sitting president to visit the Western Wall in Jerusalem's Old City, the most holy site at which Jews can pray.

Trump was joined by first lady Melania Trump, son-in-law Jared Kushner and daughter Ivanka Trump. The family was separated by gender. The president and Kushner visited one side, while the first daughter and first lady visited a portion of the site reserved for women. Trump approached alone and placed his hand on the stone.

The visit raised questions about whether the U.S. would indicate the site is Israeli territory. The U.S. has never recognized Israeli sovereignty over parts of the Old City seized in the 1967 war.

The White House struggled to answer the question. Ambassador to the United Nations Nikki Haley declared the site part of Israel, while U.S. Secretary of State Rex Tillerson on Monday dodged the question. Trump himself never commented.

The president also unexpectedly offered a new defense of his disclosure of classified information to Russian diplomats in a recent Oval Office meeting. Standing alongside Israeli Prime Minister Benjamin Netanyahu, he argued he never mentioned Israel, the source of the classified intelligence, according to various officials -- something he has not been accused of doing.

"So you have another story wrong," he told reporters.

Netanyahu played down what has appeared to be a violation of an intelligence-sharing agreement with his country, saying U.S.-Israeli intelligence cooperation is "terrific." But Trump's offhand remark was another stark reminder that his troubles at home, including the investigation of his campaign's ties to Russia and his firing of FBI Director James Comey, have followed him across the ocean.

The moment was an abrupt interruption of an otherwise warm and smooth welcome for Trump to the Holy Land. After years of butting heads with Trump's predecessor, Netanyahu celebrated a new American president's arrival as a moment of hope in the stalled peace talks between Israel and Palestinians.

"I also look forward to working closely with you to advance peace in our region, because you have noted so succinctly that common dangers are turning former enemies into partners," Netanyahu said. "It won't be simple. But for the first time in many years -- and, Mr. President, for the first time in my lifetime -- I see a real hope for change."

Netanyahu and Abbas were not scheduled to meet during Trump's visit. Both men met separately with Trump at the White House in recent months.