ORLANDO, Fla. - Tropical Storm Gamma has made landfall near Tulum, Mexico, according to the National Hurricane Center (NHC).

The system is currently packing maximum sustained winds of 70 mph.

"Slow weakening is likely through tonight while the center moves over land. Some re-strengthening is expected to begin when the center moves into the southern Gulf of Mexico on Sunday," the NHC said.

Gamma formed in the northwestern Caribbean on Friday, according to the National Hurricane Center (NHC).

Gamma is the 24th named storm of the 2020 Atlantic hurricane season and is moving toward the northwest near 9 mph. A gradual turn toward the north-northwest is expected over the next couple of days, with a decrease in forward speed. 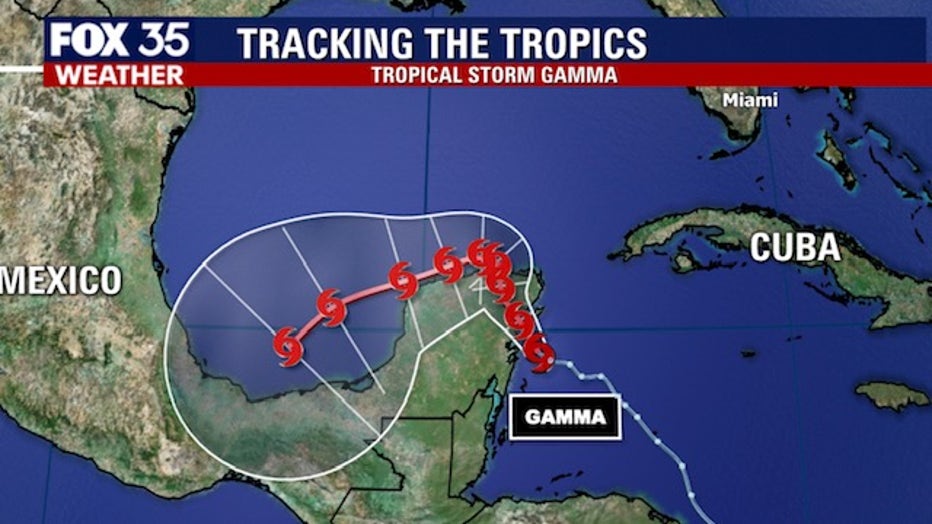 Here in Florida, there is a possible growing threat of heavy tropical rainfall late Saturday into Sunday thanks to Gamma. Rain chances begin to increase early Saturday afternoon and will continue into Sunday. One-to-three inches of rain is expected around Orlando with heavier amounts east of the city.

Current rainfall modeling is generating some rather generous accumulations across the Florida Peninsula during the weekend.

Areas south of Cape Canaveral, specifically the Treasure Coast region (Martin and St. Lucie Counties) received upwards of 8-10" of rain Thursday afternoon, any tropical rain on top of that this weekend could spell trouble.

Bottom line, have the umbrellas handy this weekend, and perhaps a Plan "B" if you had any ambitions to head into the outdoors.

A tropical wave is producing widespread cloudiness, showers, and thunderstorms over the eastern and central Caribbean Sea, with locally heavy rainfall and gusty winds affecting portions of the ABC Islands, the Lesser Antilles, the Virgin Islands, Puerto Rico, and portions of the coasts of Colombia and Venezuela. Forecasters say it could develop into a tropical depression next week. Chances of development are at 50-percent.

A second tropical wave located over the central tropical Atlantic is producing disorganized showers and thunderstorms. Chances of development are 20-percent.

A third area of disorganized showers and thunderstorms over the central Atlantic more than 1000 miles east-southeast of Bermuda is associated with a surface trough of low pressure. Forecasters give it a 10-percent chance of development.

Watch FOX 35 News for the latest weather updates throughout the hurricane season.