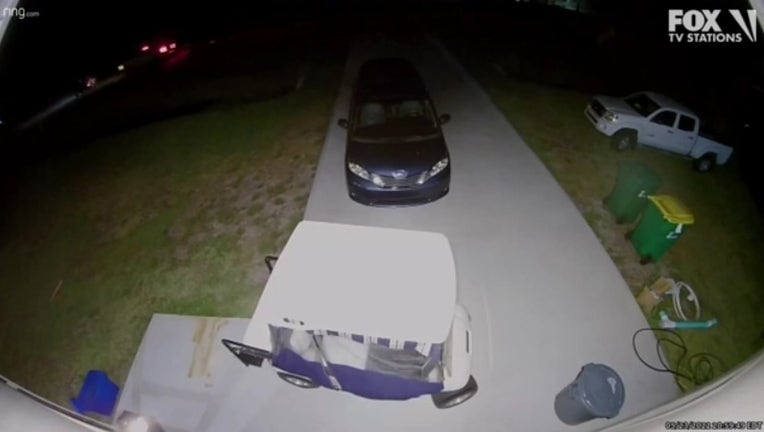 Photo via digital screengrab of the Florida Highway Patrol

MELBOURNE, Fla. - Troopers are searching for a pickup truck that reportedly crashed into a golf cart in Melbourne, leaving a father and son critically hurt.

The Florida Highway Patrol said the crash happened at 9 p.m. Monday at the intersection of Harlock Road and Lake Washington Road.

According to FHP, a 48-year-old Melbourne man was driving northbound on Harlock Road in a golf cart with his 17-year-old son, when a pickup truck traveling in the same direction, "failed to slow or stop," and struck the back of the golf cart.

Troopers said the force of the collision caused the father and son to be thrown from the golf cart. Both were taken to a hospital in critical condition.

FHP released two videos connected to the crash in hopes of locating the truck and its driver.

One video captured the collision:

Troopers are searching for a pickup truck that reportedly crashed into a golf cart in Melbourne, leaving a father and son critically hurt.

Authorities said another camera captured the truck before the crash happened:

The Florida Highway Patrol is searching for the driver of a pickup truck who troopers say struck a golf cart, injuring two people in Melbourne.

Troopers said they believe the truck is a white, newer model Chevy Silverado. It appeared to be towing a small trailer and had a large toolbox across its back window.

Anyone with information about the crash is asked to call FHP at 407-737-2213 or Crimeline.