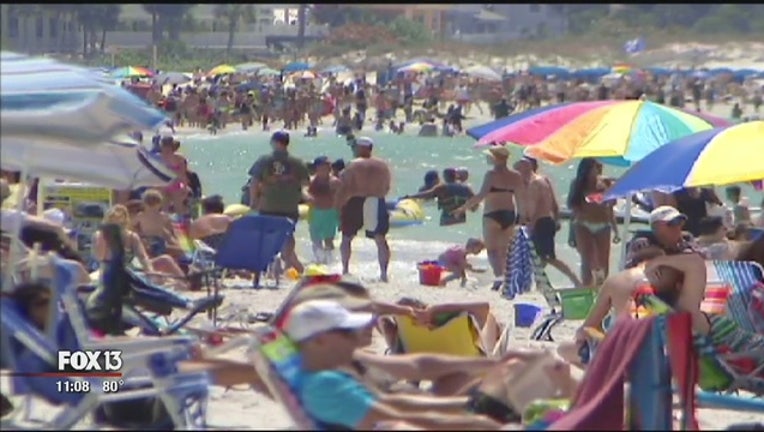 TALLAHASSEE (NSF) - With Florida coming off a record year for tourism in 2017, newly released numbers indicate sun-seekers continued to flock to the state during the first three months of 2018.

Florida drew an estimated 33.2 million visitors from January through March, which was a 7.4 percent increase over the same period in 2017 and is a record quarterly number, Gov. Rick Scott and the tourism-marketing agency Visit Florida said Tuesday.

The increase this year was buoyed by 29.1 million domestic visitors, 8.5 percent more than during the first quarter of 2017. The number of Canadian visitors was up 2.5 percent during the quarter, though overseas visitors were down 0.7 percent, according to comparisons posted on the Visit Florida website.

Ken Lawson, CEO of Visit Florida, said in a recent interview that tourism funds 1.4 million jobs in the state.

“It makes sure those people can feed their families and pay their mortgages,” he said. “Tourism is the number one economic driver in Florida.”

Scott, who is running for U.S. Senate this year, has made a high-profile priority of increasing tourism numbers and has pushed the Legislature to set aside money for Visit Florida’s marketing efforts. Lawmakers approved $76 million for the current year and the same amount for the fiscal year that starts July 1.

Florida drew an estimated 116.5 million visitors in 2017, despite grappling with issues such as damage from Hurricane Irma in the Florida Keys and other areas, according to state numbers. That was up from a previous high of 112.4 million in 2016.

If last year is an indication, the first-quarter total of 33.2 million visitors --- a period that included the northern cold-weather months of January and February --- will be a high-water mark in 2018. Last year, Florida drew 30.9 million visitors in the first quarter, with the next-highest total of 29.36 million in the second quarter, Visit Florida numbers show. The third quarter, which included steamy parts of the summer and Hurricane Irma, was the lowest at 27.7 million.

Canada was the top source of international visitors in 2017, followed by the United Kingdom, Brazil, Argentina and Columbia, according to the Visit Florida website. Canada, however, was the only one of those countries that provided an increase in Florida visitors in 2017.