A Texas judge on Friday blocked the state from investigating as child abuse gender-confirming care for transgender youth.

A Texas judge on Friday blocked the state from investigating as child abuse gender-confirming care for transgender youth.

DFPS said it has opened nine investigations since Abbott’s directive and Paxton’s opinion.

A Child Protective Services supervisor testified Friday that she has resigned from the department because of concerns about the directive and said cases involving gender-confirming care were being treated differently than others. 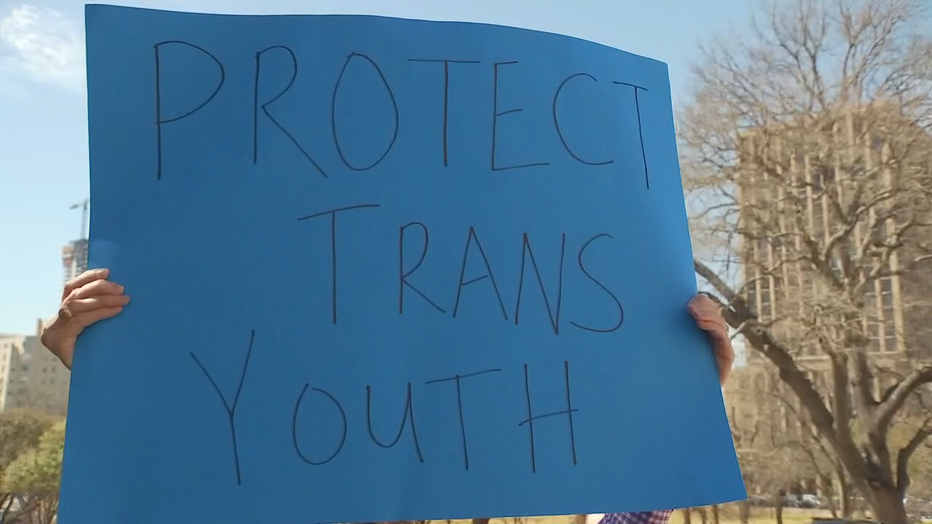 The American Civil Liberties Union and Lambda Legal sued on behalf of the parents.

The groups also represent a clinical psychologist who has said the governor’s directive is forcing her to choose between reporting clients to the state or losing her license and other penalties.

Dale Carpenter is an SMU constitutional law professor not involved in this case.

"The argument being made by the ACLU and the advocates of these transgender youth and their families is that the governor exceeded his authority under state law," he said.

"The state's case is there's some uncertainty as to the medical science and at least they quote some authorities that say some of this treatment is unnecessary perhaps in the long term may not be very beneficial and harmful to children," Carpenter said.

"We are so thrilled for trans youth and their families in Texas and just so excited that the judge recognized just the incredible harms that have been happening since the 22nd when Gov. Abbott released his directive," said Currey Cook with Lambda Legal.

Lambda Legal is one of the organizations backing the lawsuit on behalf of a family with a trans child.

The injunction just blocks the state from further investigations until a trial can be held.

"The judge did find that there is a basis to say that we will succeed on the merits, which was a finding she is supposed to make at this stage," Cook said. "So I think she was convinced that we have a claim going forward and will be successful."

Paxton tweeted after the result: "Democrat judge tries to halt legal and necessary investigations into those trying to abuse our kids through ‘trans’ surgeries and prescription drugs. I’m appealing. I’ll win this fight to protect our Texas children."

LGBTQ advocates say even if they win in the long run, damage has been done.

"The stigmatic harm of all this is like this genie you can put back in the bottle," Cook said.

"Today, unfortunately, we have to gather here once again as the witch hunt for parents of trans kids continues in this state," said Emmett Schelling, executive director of the Transgender Education Network of Texas.

"We're optimistic today that the court will continue to see the governor's action for what it is: a politically motivated opinion that is only going to pit the government against loving families," said Sam Ames with the Trevor Project.

The hearing comes the same day that dozens of major companies — including Apple, Google, Johnson & Johnson, Meta and Microsoft — criticized the Texas directive in a full-page ad in the Dallas Morning News.

"The recent attempt to criminalize a parent for helping their transgender child access medically necessary, age-appropriate healthcare in the state of Texas goes against the values of our companies," read the ad, which used the headline "DISCRIMINATION IS BAD FOR BUSINESS."

The governor’s directive and Paxton’s opinion go against the nation’s largest medical groups, including the American Medical Association, which have opposed Republican-backed restrictions on transgender people filed in statehouses nationwide.

A trial is scheduled for July.