Are EV batteries as green as they say? Yes and no

Eric Wachsman, professor at the University of Maryland and director of Maryland Energy Innovation Institute, weighs in on some of the reasons why some people are not totally behind electric vehicles.

Tesla reported Wednesday that its third-quarter profit more than doubled from a year ago, fueled by higher vehicle sales.

Excluding special items, the company made $1.05 per share, beating Wall Street estimates of $1 per share, according to data provider FactSet. Revenue rose 56% to a record $21.45 billion, but fell just short of estimates averaging $21.98 billion.

Tesla stuck with its prediction of 50% annual vehicle sales growth over a "multi-year horizon," appearing confident that demand will remain strong.

"The rate of growth will depend on our equipment capacity, factory uptime, operational efficiency, and the capacity and stability of the supply chain," the company said.

But it will take a stellar fourth-quarter sales performance to reach the 50% goal.

Earlier this month, Tesla reported vehicle sales that rose 35% for the July-September period compared to the second quarter as the company’s huge factory in China got past supply chain issues and pandemic restrictions.

The company sold 343,830 cars and SUVs in the third quarter compared with 254,695 deliveries made from April through June. Tesla said it produced 365,923 vehicles in the July-September period.

Analysts have questioned whether Tesla is experiencing waning demand for its vehicles, which in the U.S. start around $49,000. 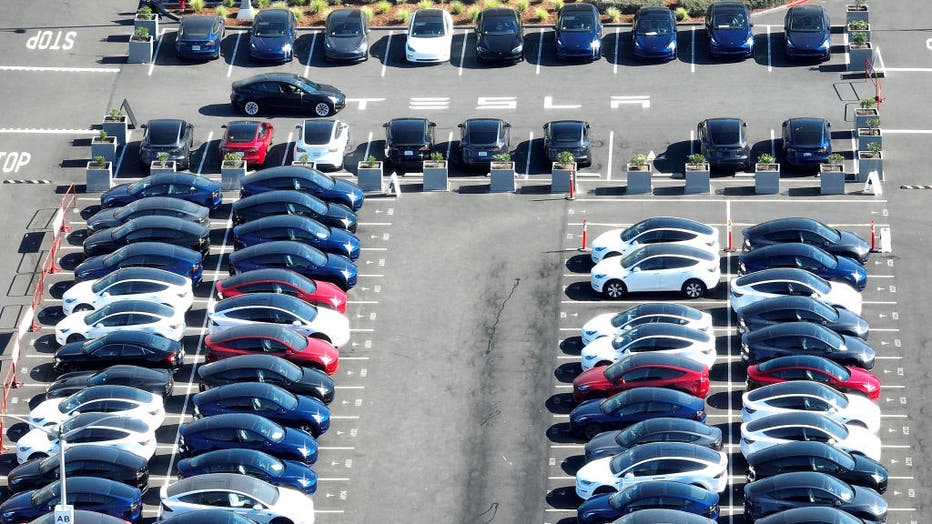 But Tesla said it had higher-than-usual numbers of vehicles in transit at the end of the third quarter that will count as sales once they reach customers. It said high delivery volumes toward the end of each quarter is making it hard to find transportation, which is becoming expensive. The company said it's smoothing out its delivery pace.

The company said that it remains focused on increasing vehicle production as fast as it can by raising the weekly build rate in Fremont, California, and Shanghai ,while making progress at new factories in Texas and Germany.

But it said logistics and parts supply bottlenecks "remain immediate challenges, although improving." Battery supply constraints, Tesla said, will be the main limiting factor to electric vehicle market growth in the medium and long terms.

High prices for raw materials caused a hit to profits, along with inefficiencies from ramping up the factories in Germany and Texas, the company said.

Still, the company said initial deliveries of its Semi truck will start in December.

Shares in Tesla Inc. were down about 3% in extended trading Wednesday after the company's third-quarter sales missed Wall Street estimates. The stock has lost 37% so far this year, burdened by CEO Elon Musk's $44 billion bid to buy Twitter. Musk earlier backed out of the purchase, contending that Twitter misrepresented the number of fake "spam bot" accounts on its platform. Twitter sued, and a Delaware judge has given both sides until Oct. 28 to work out details. Otherwise, there will be a trial in November.