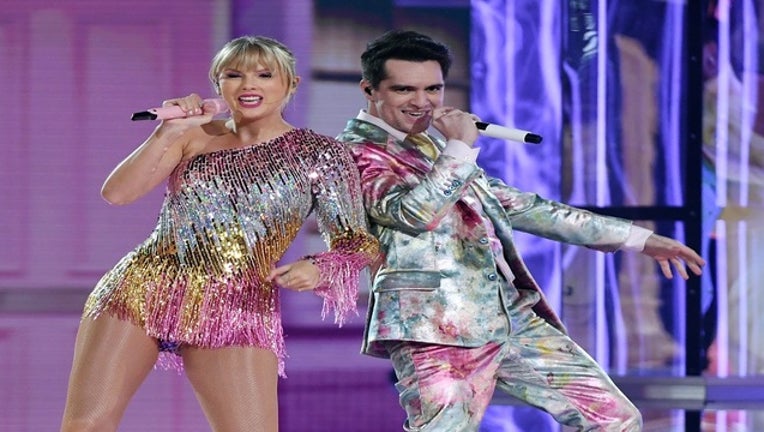 LAS VEGAS, NEVADA - MAY 01: Taylor Swift (L) and Brendon Urie of Panic! at the Disco perform during the 2019 Billboard Music Awards at MGM Grand Garden Arena on May 1, 2019 in Las Vegas, Nevada. (Photo by Ethan Miller/Getty Images)

FOX NEWS - Taylor Swift says her new music carries some “political undertones” after speaking out in favor of Tennessee Democrats in 2018.

The “ME!” singer typically stays away from polarizing political opinions among her fans. However, after reportedly causing a spike in voter registration with her first foray into political activism, the 29-year-old says that her new music will help further her agenda of getting people out to the polls.

“I definitely think there are political undertones in the new music I made,” she told German outlet RTL in an interview (via Elle). “I’m not planning to stop encouraging young people to vote and to try to get them to talk about what’s going on in our country. I think that’s one of the most important things I could do.”

In October, Swift broke her political silence in a lengthy Instagram post ahead of the 2018 midterm elections. In it, she encouraged her 112 million followers to vote for Democrat Phil Bredesen for the Tennessee Senate, and also for Rep. Jim Cooper, a Democrat who was running for re-election. Her post was also highly critical of Republican Marsha Blackburn.

“As much as I have in the past and would like to continue voting for women in office, I cannot support Marsha Blackburn," Swift wrote at the time. "Her voting record in Congress appalls and terrifies me."

She continued: “She voted against equal pay for women. She voted against the Reauthorization of the Violence Against Women Act, which attempts to protect women from domestic violence, stalking, and date rape. She believes businesses have a right to refuse service to gay couples. She also believes they should not have the right to marry. These are not MY Tennessee values.”

Ultimately, Blackburn won her election, but Vote.org data suggests that Swift’s post influenced many to register to vote and get involved in the election process. Now it seems the “Shake it Off” singer is hoping to continue that push going into the 2020 presidential election.

In a recent essay for Elle, the star said it was her responsibility to use her platform to influence people.

“Invoking racism and provoking fear through thinly veiled messaging is not what I want from our leaders, and I realized that it actually is my responsibility to use my influence against that disgusting rhetoric. I’m going to do more to help. We have a big race coming up next year," she wrote.

At this time, there’s no word yet on when the singer’s politically-charged album will drop.