The fast food chain has been creating a new streamlined menu to make room for new entries.

IRVINE, Calif. - Taco Bell is planning to hire at least 5,000 people during the restaurant chain’s outdoor hiring event at locations nationwide on April 21.

The company is converting parking lots into job fairs at nearly 2,000 company and franchise-owned restaurants in an effort to adhere to COVID-19 safety precautions. Taco Bell said attendees of the one-day event, which it refers to as "hiring parties," will have on-the-spot interview opportunities for a variety of roles.

Some candidates may even be able to participate in drive-up interviews without needing to leave their car, the company said, noting that all of the events will be held outside.

The goal is to hire at least 5,000 new team members as the company plans for continued growth, including more restaurant reopenings, remodels and new builds throughout 2021. 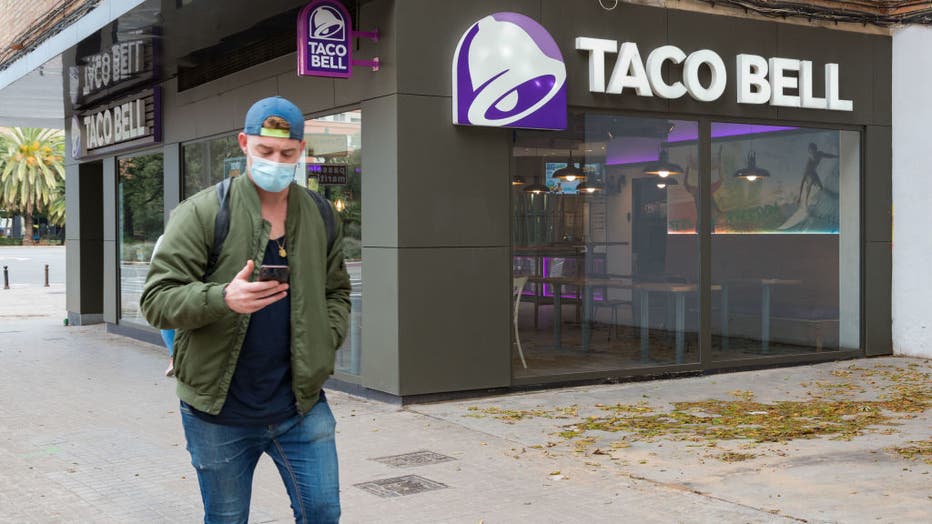 FILE - A man wearing a face mask walks past a Taco Bell restaurant in a file image. (Photo by Xisco Navarro/SOPA Images/LightRocket via Getty Images)

"It’s no secret that the labor market is tight, which is why we are thrilled to host our fourth round of Hiring Parties in partnership with our franchisees," Kelly McCulloch, Taco Bell’s chief people officer, said in a statement.

Taco Bell said open roles vary by location but include positions at all levels — including general managers and "bellhops" to support drive-thru service with tablet ordering.

General managers at company-owned stores receive up to four weeks accrued vacation per year and also have paid "baby bonding" time for new parents and guardians, as well as eight weeks of fully-paid short-term disability after the birth of a child, the company added.

Candidates who are interested in applying for Taco Bell roles near them can visit jobs.tacobell.com.

Taco Bell and its franchise organizations operate more than 7,000 restaurants worldwide. The company said it aims to have 10,000 locations open globally this decade.

Other companies have painted rosier outlooks for this year. Six Flags theme park previously announced plans to reopen all 26 of its locations for the 2021 season and said it intends to hire thousands of team members via online hiring events.