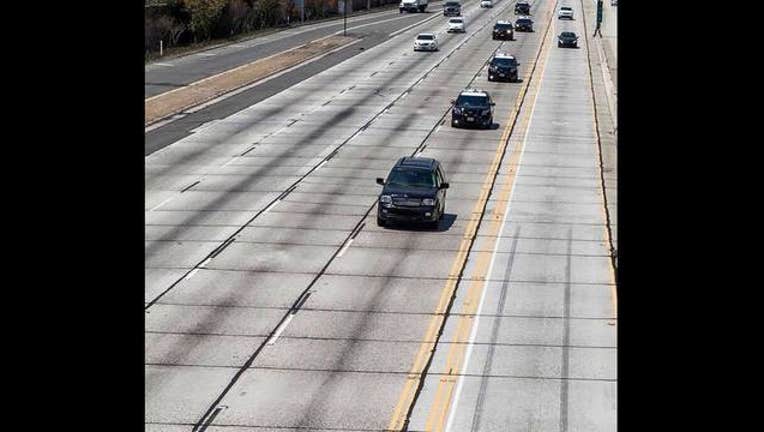 LOS ANGELES (FOX 11 / CNS) - A reckless driving suspect in an SUV led authorities on a circuitous, nearly two-hour chase Monday from the San Fernando Valley to the Orange-San Diego county line, where the vehicle ran out of gas and the teenage driver was arrested.

Sheriff's deputies initially tried to stop the motorist in the Calabasas area, but he kept going, according to the California Highway Patrol.

The black Lincoln Navigator entered the westbound Ventura (101) Freeway about 12:30 p.m., and the sheriff's department asked for assistance from the CHP, which took over the pursuit, said CHP Officer Monica Posada.

The suspect reversed course and drove east on the 101 Freeway, then north on the San Diego (405) Freeway to Sylmar, where he transitioned to two other freeways in a circular pattern and wound up driving south on the 405 through the Sepulveda Pass and into Orange County.

The chase came to an end about 2:25 p.m. on southbound Interstate 5 in the San Onofre area, where the SUV stopped and the 17-year-old Los Angeles area resident got out of the SUV and surrendered to officers with guns drawn.

The teen was booked on suspicion of felony failure to yield, according to Officer Rafael Reynoso of the CHP's Capistrano area office.

There was no indication that the youth, whose name was withheld because of his age, was under the influence of alcohol or drugs, Reynoso said.