The CDC offers steps on how to make your own cloth face covering, regardless of whether or not you know how to sew.

LOS ANGELES - In a study done to analyze gender differences with regard to response to the novel coronavirus, researchers found that male participants reported that they intended to wear a face covering less than women because they felt wearing a mask to protect themselves is “shameful, not cool,” or “a sign of weakness.”

Researchers from Middlesex University London in the U.K. and the Mathematical Science Research Institute in Berkeley, California, conducted the study using 2,459 participants living in the U.S., 51 percent of whom were men, in hopes of understanding how men and women respond to directives from government agencies, like the Centers for Disease Control and Prevention, to wear face coverings to protect themselves from COVID-19.

Researchers found men are much less likely to believe that they’ll be seriously impacted by COVID-19, despite data that indicates that men are generally more at risk of negative outcomes from the virus than women.

Researchers found men are much less likely to believe that they’ll be seriously impacted by COVID-19, despite data that indicates (https://escholarship.org/uc/item/76f9p924) that men are generally more at risk of negative outcomes from the virus than women.

RELATED: Fauci says world may never return back to normal after coronavirus outbreak

In early April, the CDC recommended that all individuals wear cloth face coverings when going outside. Cities like Los Angeles implemented an executive order to require all residents to wear masks or facial coverings while in public in hopes of combating the spread of the novel coronavirus.

These droplets can be dispersed to a fairly large radius and can linger in the air for up to 14 minutes, and in some instances even longer.

"You never know when you're going to bump into somebody around a corner," Los Angeles Mayor Garcetti said. "Have your mask with you when you leave your house.“

Amid rising infection rates in some states and a climbing death toll across the U.S., the CDC announced on Friday that all models indicate that the novel coronavirus could claim more than 100,000 American lives by June 1.

Speaking at a Rose Garden event on Friday, President Donald Trump said he is hopeful to have a coronavirus vaccine on the market and distributed by the Department of Defense by the end of the year.

Trump, who did not wear a mask at the event, was asked why not everyone was wearing a face covering.

“I’ve been tested, we’ve all been tested and we're quite a distance away, and we're outdoors,” said Trump. "I told them I gave them the option they can wear it or not.”

The decision to wear a mask in public is becoming a political statement — a moment to pick sides in a brewing culture war over containing the coronavirus.

While not yet as loaded as a “Make America Great Again” hat, the mask is increasingly a visual shorthand for the debate pitting those willing to follow health officials' guidance and cover their faces against those who feel it violates their freedom or buys into a threat they think is overblown.

Such a political statement was on full display in late April, after Vice President Mike Pence received criticism for a maskless visit to the Mayo Clinic in Minnesota, flouting the clinic’s guidelines. Pence later said he should have worn one and did during a subsequent trip to a ventilator plant. 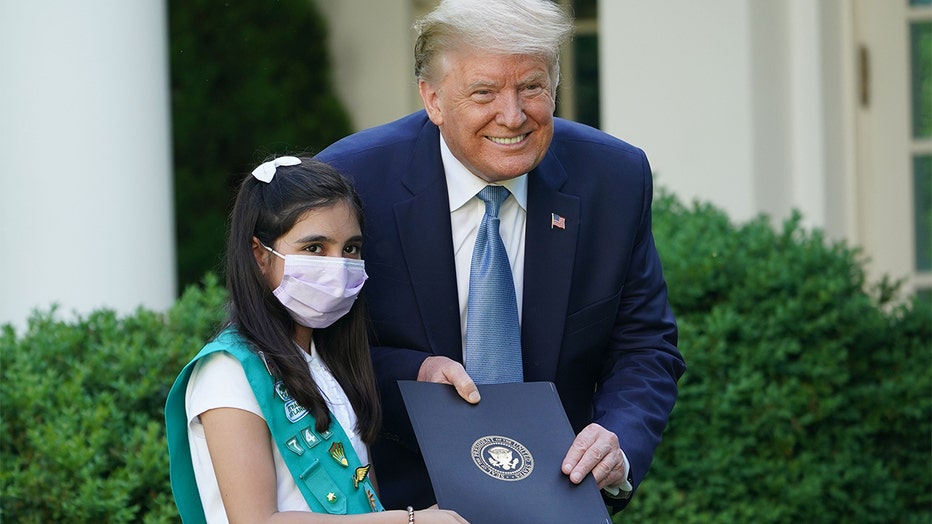 Trump was barefaced when he spoke to masked journalists, workers and Secret Service agents at a face mask factory in Arizona May 5. He later said he briefly wore a mask backstage but took it off because facility personnel told him he didn't need it.

Trump has always appeared mask averse. Within minutes of the CDC announcing its recommendations to wear face coverings in public, he said, “I don’t think that I’m going to be doing it.”

As U.S. states ease coronavirus lockdowns, medical experts, including Fauci, have urged caution, reminding the public that social distancing combined with wearing facial coverings are necessary tools in slowing the spread of the virus until a vaccine is produced.