Stuck at the airport for a delayed or canceled flight? What can you do?

Thousands of passengers were stuck at airports over the weekend, including Orlando International Airport, after storms delayed or canceled flights, coupled with a Southwest Airlines system outage that further delayed their flights.

ORLANDO, Fla. - Thousands of passengers were stuck at airports over the weekend, including Orlando International Airport, after storms delayed or canceled flights, coupled with a Southwest Airlines system outage that further delayed their flights.

In the days since, Southwest Airlines apologized for its system issues, which have been resolved, and airports and airlines appear to have recovered. Fifth-four flights were canceled Monday at OIA, some 5.5% of their daily operations, a spokesperson said.

Storms and weather delays are not uncommon in Florida and with people visiting from across the U.S. and World, what are your rights? And do they actually help?

Matt Schweda said he's been stuck in Orlando for three days after his return flight on Spirit Airlines to Detroit was canceled.

"We went and stood in line with hundreds of other people and finally got up to the counter after three hours for them to tell us there is nothing that they can do," he said. Spirit gave him two choices: a refund and then he'd have to find a last-minute flight back on his own, or re-book on Spirit for the next available flight. 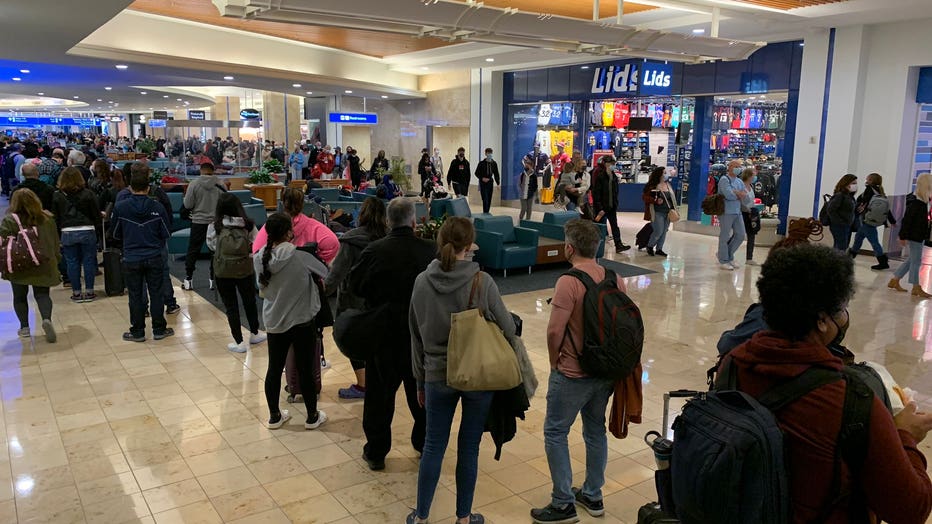 He took the next available Spirit flight out, which isn't until Thursday.

"We are looking at hundreds of dollars every night, plus food, just hoping Spirit will get us home Thursday," he said. "But I have a feeling they will cancel that flight too."

It's known that passengers have rights when flights are delayed, canceled, or even overbooked, but the policies and procedures at each airline are different from one another, adding another element to a complicated and emotional situation.

"This is a different chapter from the same book that we have seen play out again and again and again," said Kyle Potter, of Thrifty Traveler, a travel website.

Under federal law, airlines are required to follow one rule – provide a refund for canceled or delayed flights. However, when the weather is the reason, airlines do not have to issue a refund, but they do have to rebook you on another flight, even if it's days later, Potter said.

"Beyond that, when it comes to compensation or a flight being delayed – or someone missing part of their vacation or time with family, even something as simple as getting a hotel when your airline cancels your flight, you get stuck at the airport overnight – there is really nothing enshrined in the law that guarantees passengers really minimal protections when things do go wrong," he said.

"Until airlines face some real penalties for repeatedly failing customers, these mass disruptions are going to continue happening," he said.

A so-called "Airline Passenger's Bill of Rights" has been proposed in U.S. Congress over the years that would, among other things, compensate passengers for delayed or canceled flights and eliminate compensation caps for overbooked flights. It was most recently introduced in the U.S. Senate in November 2021, but has not progressed any further.

Additional information can be found at U.S. Department of Transportation's website.